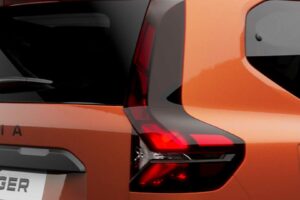 It will also be offered with five seats.

The new teaser video seemingly confirms we are dealing with a wagon version of the Logan sedan / Sandero hatchback, complete with rugged Stepway cues and the same lovely orange paint. The brief video shows quarter glass that pops out along with the same nifty roof bars as the Sandero Stepway where they can be positioned both longitudinally and transversely.

Available with a choice of five or seven seats, the Jogger has Volvo-esque taillights with Dacia’s Y-shaped graphics and an upright rear end to maximize cargo capacity. The headlights seem to be largely carried over from the latest Logan/Sandero twins and should have standard LEDs for the daytime running lights and the short beam.

The interior cabin has not been previewed so far, but with Dacia being all about cost-cutting to drop the prices as much as possible, expect the dashboard to be virtually carried over from the Sandero Stepway pictured below. It will be vastly more practical thanks to its three-row layout or a two-row configuration with a huge cargo area behind the rearmost seats.

While Dacia offers great value for money, there are many people complaining about the lack of a more powerful engine in the Logan and Sandero. It remains to be seen whether the Jogger will offer a four-cylinder unit as opposed to the sedan and hatchback duo available strictly with naturally aspirated and turbocharged three-pot mills. It would make sense to add a beefier engine considering the new wagon will be bigger and therefore heavier, especially with seven people or the cargo area completely full.

Following the world premiere scheduled to take place on September 3, the new Dacia Jogger will be showcased at IAA Munich next week. It should go on sale either by the year’s end or early 2022.