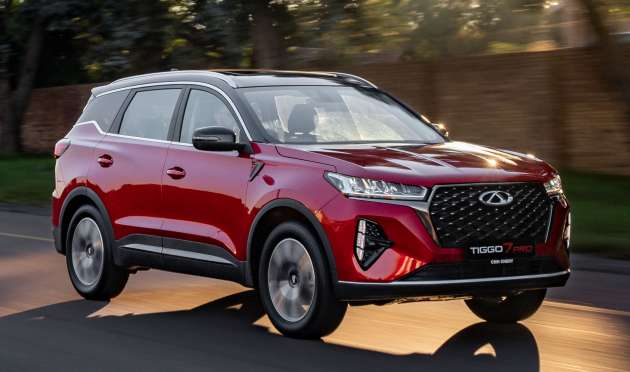 Chery has launched the Tiggo 7 Pro in South Africa. The C-segment SUV slots in between the Tiggo 4 Pro and Tiggo 8 Pro – which are already on sale in the right-hand drive market – and is available in Distinctive and Executive variants.

Under the bonnet of the South African spec Tiggo 7 Pro is a 1.5 litre turbocharged four-cylinder petrol engine. The Chery-developed Acteco unit makes 147 PS at 5,500 rpm and 210 Nm of torque between 1,750 and 4,500 rpm. Power is sent to the front wheels via a CVT with nine virtual ratios.

Elsewhere, the midsize SUV is also available with a 1.6 litre turbo with 197 PS and 290 Nm, and a seven-speed dual-clutch automatic transmission. There’s also a 48-volt mild hybrid version of the 1.5L engine. The Tiggo 7 Pro looks handsome, if a little generic. The modern design looks nothing like the original Tiggo that was sold in Malaysia – some might remember that one from the Chery Alado days, which aped the second-gen Toyota RAV4. No shortage of contemporary design cues, including a hexagon grille with “galaxy-inspired geometric matrix diamond” mesh, slim LED headlamps and T-shaped LED daytime running light and fog light housings.

The blacked-out D-pillars and window kink look like those on the X70, but below that is a prominent shoulder line crease and another one that extends from the rear lights into the rear doors. Speaking of rear lights, the Tiggo 7 Pro gets an in-trend full-width LED light bar with a Chery script logo. This logo style is used by Porsche, Proton and most recently, Lexus. The wheels are 18-inch alloys, and top variants get red brake calipers. 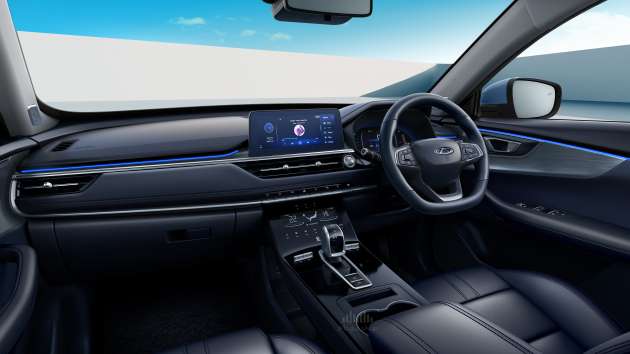 Step inside and you’ll find a good looking and contemporary dashboard, even if it looks a little familiar in places. Like in the Tiggo 8 Pro, there are three screens, including a 7.0-inch digital instrument panel and a 10.25-inch infotainment one with Apple CarPlay, Android Auto and a reverse camera. Below this sits a flush monochrome screen for the dual-zone air con (with N95 air filtering), which integrates touch panel buttons and a few physical switches.

The seats – six-way powered for the driver, plus a four-way powered front passenger one in the Executive – are covered in black synthetic leather with contrast stitching. As you’d expect from a Chinese SUV, voice command is standard. With this, one can call out the climate control, one-touch electric windows and the panoramic sunroof of the Executive variant. Wireless charging and selectable LED ambient lighting are also standard.

Last but not least is the jaw-dropping bit in the headline, the one million km warranty. That 10-year or 1m km warranty is for the engine, while the general mechanical warranty is a more conventional five-year/150,000 km package. Chery South Africa also provides a five-year/60,000 km service plan and five-year unlimited mileage roadside assistance. What do you think of this warranty package? Good or just good for headlines?

This isn’t random – we’re covering Chery because the brand is coming to Malaysia this year and the Chinese carmaker has promised us a range of SUVs including the Omoda 5 (B-segment, 1.6T, DCT), this Tiggo 7 Pro and the Tiggo 8 Pro (larger seven-seater version of the 7 Pro, 1.6T, DCT). There’s also the Tiggo 4 Pro, but the big question is can Chery price that compact SUV (and its other models too) cheap enough to compete against national makes. They can’t just strip out the car either, because the Perodua Ativa and Proton’s X SUVs are well-kitted. Click on the links and tell us what you think of this new breed of Chery SUVs.