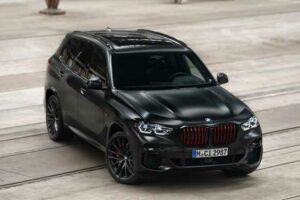 BMW just loves its special editions. Last year, the high-performance X5M and X6M were both gussied up in special matte paint to mark the “First Editions.” Now BMW is applying a similar formula to the regular 2022 BMW X5. It’s called the Black Vermilion Edition, and it’s so murdered-out even Darth Vader would give his nod of approval.

The recipe for the Vermilion is simple. Take a normal BMW X5 xDrive40i—that’s the base car with the the 335-hp 3.0-liter I-6 and AWD—and apply matte black paint (Frozen Black in BMW-speak). Then black out everything else. Tint the rear windows, and delete any chrome trim; there’s no brightwork anywhere on the exterior.

The grille and the brake calipers are the only exception. Both have been turned as red as Emperor Palpatine’s Royal Guards, and the brakes themselves have been upgraded to M Sport spec. Next, add some black powder-coated wheels to hide most of the calipers—these are the 22-inch, double-spoke 742M light alloys, in case you were wondering. Vermilion Editions also come with a M Sport exhaust (that’s typically not available on the xDrive 40i), adaptive M suspension, and the M Sport bumpers.

Imperial Starfighter Corps pilots would feel right at home inside. Everything from the seats to the roof liner have been trimmed in black Merino leather or black Alcantara. Some red piping on the seats and dash, as well as a crystal shift lever round out the look and lift the inky-black interior.

We’re pretty sure you could spend a few of your own dollars and recreate much of the Black Vermilion Edition’s effect yourself, but the real-deal will be fairly exclusive. BMW only plans on selling 350 of these special editions in the U.S., and production will run from September to November.