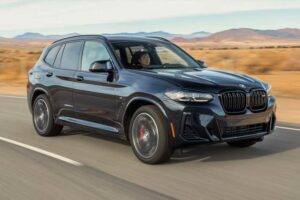 Having lived with the BMW X3 M40i for a year in our long-term test fleet, we know this vehicle well. During our 30,000 miles with the crossover, we arrived at informed conclusions about BMW’s popular luxury compact SUV. It’s practical, upscale, and—most of all—sporty. Now, the 2022 BMW X3 boasts updates which aim to further enhance performance on the M40i model.

Our recent test drive confirmed the 2022 BMW X3 M40i’s enthusiastic character remains intact. What’s less cut and dry is whether that’s enough to balance out its foibles or keep it competitive in today’s SUV market.

Abstract art seems to have a strong influence on BMW’s styling approach, and changes made to the 2022 X3’s exterior better align it with the strange forms permeating the marque’s portfolio.

The headlights are slightly slimmer while the signature kidney grille grows and is outlined by a single frame. Lower down, sharper-edged air intakes are enlarged. At the rear, slender horizontal vents suggest aerodynamics are at play. More noticeable are the redesigned taillights, which BMW describes as having “a three-dimensional-modelled pincer-claw contour.” Right. A multitude of M badges remain, and side mirrors with tiny winglets are a new detail cribbed from the full-fledged X3 M.

The straight-six remains the X3 M40i’s centerpiece. Smooth and sweet-sounding, its power impresses most of all. At full throttle the updated X3 M40i comes off the line aggressively, leaning back on its rear tires as xDrive all-wheel-drive optimizes traction. It’s all aided by the eight-speed automatic’s excellent programming and shift speed. BMW says the 48-volt system can hasten acceleration initially and once underway.

Despite the ever-eager throttle map, hybridization also benefits situations when M should stand for Mellow rather than Motorsport. It makes engine stop-start functionality seamless, eliminating the hesitation or clumsiness that can befuddle similar systems. It shuts off the engine immediately at a stop or even a moment before. More important, it fires up again instantly, ensuring power is available as soon as sole touches accelerator.

The hybrid system seems to help the 2022 BMW X3’s fuel economy, even if its EPA rating doesn’t immediately reflect that. The 2022 M40i is certified at 21/26 mpg city/highway, whereas last year’s equivalent got 27 highway mpg. However, the 2022 model also gained contact patch as it has 245/45 front and 275/45 rear tires on 20-inch wheels all around, compared to last year’s 245/50 rubber at all four corners on a 19-inch setup. Hybridization might negate any rolling resistance penalty, as both versions get a 23-mpg combined rating. Our test car came on $600 Bridgestone Alenza performance run-flat tires.

As our test drive in the 2022 BMW X3 M40i immediately followed time in the 2022 M440i Gran Coupe and new G42-generation M240i, we were struck by how similar the crossover felt to those sporty, low-slung cars—an elevated eyeline seemed to be the main difference. Like in the best BMWs there’s fine cohesion among the X3’s controls, adding intuition to enthusiastic driving. On a winding canyon road, this X3 shows balance and poise that’s impressive for any vehicle, let alone an SUV. Yet the sporty character’s appeal fades in everyday situations on city streets.

The M Sport suspension mandatory on the M40i is a primary culprit. It’s an adaptive system that alters its rates between different drive modes, which all feel stiff. Surface textures are transmitted constantly into the cabin, and larger imperfections hit abruptly. Terrific body control may result from this firm tune—this SUV remains supremely composed—but the gritty ride quality counters what luxury it might aim for.

That’s a familiar refrain from our experience with other M Sport-suspended BMWs. We eventually came to tolerate how our long-termer traversed pavement, though swapping that vehicle’s stock wheels and tires for a different, smaller set improved comfort and performance.

Another similarity to our long-termer—and, indeed, most of today’s BMWs—is the stark interior. Materials quality is good, but flourishes are left to trim panels and ambient lighting rather than the design itself. That also makes the 12.3-inch infotainment touchscreen, an upgrade over last year’s 10.3-inch unit, stand out. It runs BMW’s newer iDrive 7 user interface, which is generally logical and offers deep functionality. Still, against other entrants in the class, the 2022 BMW X3’s interior lacks panache and comes across as more functional than luxurious.

Yet more speed isn’t what the X3 needed for 2022—other aspects will test the commitment of anyone who appreciates a fast blast. Pounding by the hard suspension and views across the drab dashboard had us feeling uninspired.

That is, until another curve appeared to challenge the chassis, or a straight tempted us to put the pedal to the floor. For as long as BMW’s X3 M40i drives like it does, enthusiasts have no reason to fret about choosing an SUV as their daily driver.