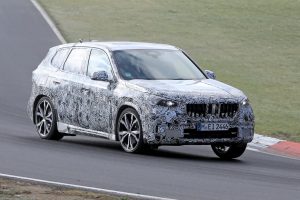 BMW X1 with front- and four-wheel drive models, while the electric iX1 variant will follow later

BMW is ramping up with development on the next generation of its X1 SUV, and prototypes have now been spotted testing at the Nurburgring.

The third edition of the entry-level SUV is will be a hugely important model for the brand when it goes on sale in 2022: the current version makes up over 12 per cent of all BMW SUV sales, and it’s second only to the X3 in the brand’s SUV line-up, with more than 260,000 sold in 2019.

The latest spy shots show a car that wears a disguise ahead of its official reveal, but many details of the car – as picked out in our exclusive rendering – are clear to see. The overall look is one that’s more imposing than the current car, achieved by features like sharper headlights and a larger, more upright grille.

Along the sides, the next X1 gets a flatter window line, a more vertical rear hatch and shorter overhangs. These all suggest a chunkier, more 4×4-like appearance to the second-gen X1, which will help separate it further from the coupé-influenced X2.

The interior should be a much more straightforward update. BMW is likely to introduce the new interior architecture used on the latest 1 Series, so expect a more angular design to the switchgear and vents, plus the latest in infotainment tech – including a fully digital instrument panel.

It’s all but certain that the new X1 will use an updated version of the current car’s UKL2 platform. You can expect the engine line-up to remain very similar, kicking off with front-wheel-drive sDrive versions using a turbocharged 1.5-litre three-cylinder engine, developing 138bhp and priced from just over £30,000. Diesel is likely to remain on the menu too, especially for the buyers of xDrive all-wheel-drive versions.

The xDrive25e plug-in hybrid model will continue, but BMW’s biggest priority will be the development of an all-electric version to rival the Mercedes EQB. The brand has confirmed that the new model, named iX1, will follow hot on the heels of the combustion-powered version with a 2023 release.

BMW has already revealed an electric version of the larger X3 called iX3, with a maximum range of 285 miles on a single charge thanks to an 80kWh battery pack. It’s likely that the all-electric iX1 will borrow that car’s 282bhp electric motor, but given the packaging constraints of a smaller platform the iX1’s battery size will likely be capped at a smaller level.