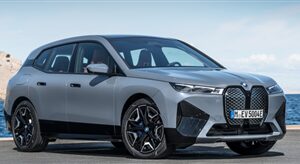 BMW has been messing around with electric cars for 40 years. No one remembers the 1972 1602e, do they? It was BMW’s first EV. It had a dozen 12-volt lead-acid batteries stuffed in the trunk. The batteries weighed 771 pounds and were good for a range of 19 miles in the city. The car was a conversion of an internal combustion engine vehicle, but it was a good conversion. BMW made two of them, both of which paced the marathon in the 1972 Munich Olympics. One of them was parked at this year’s IAA Mobility show in Munich, looking like-new.

In the 40 years since then, BMW has tried other EVs, and even made something of a sales success with the cute and quirky i3, moving over 200,000 of them out showroom doors worldwide. The iX3 was a conversion and was made for Europe and Asia only. 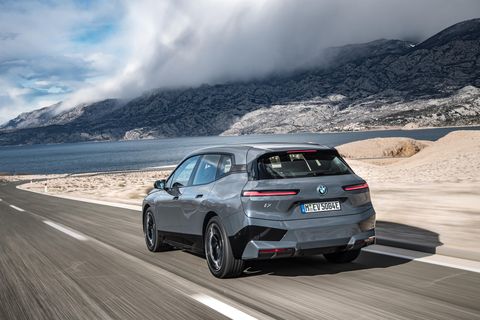 But the new iX xDrive50, arriving in showrooms here in March, will be BMW’s first really serious, mass-produced electric production car, designed, built, and sold on a global scale, with pretty much all of BMW’s future hopes pinned to its scratch-healing grille. Having just driven one across the countryside, on the autobahns and up into das Alps of Bavaria a few weeks ago, I can say it is a splendid machine in almost every way.

Except price. The price is a little crazy. Okay, more than a little. The starting sticker for this thing is $84,195. Even when you knock off the $7500 Federal tax credit it’s still high. It’s more than almost every EV on the market right now save the Tesla Model S, twice the price of the Mustang Mach-E, 20 grand more than the base Audi eTron, two or three times more than the Leaf and Bolt, and 25 grand more than a Polestar 2.

But for that money you get a sound, practical, fun EV, and if you want something sporty, a sedan-looking EV is coming after the iX xDrive50 you see here called the i4 that will start at a much more reasonable $56,395. More on that at a later date. 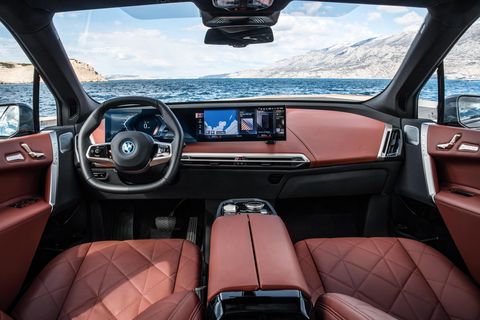 First, the iX xDrive50. The new model is not a conversion of a gasoline-fueled car but was conceived from the outset as an EV. It starts with an all-new aluminum spaceframe and adds CFRP (carbon-fiber-reinforced polymers), along with a judicious use of steel and aluminum from there out. Inside the aluminum A-pillar, for instance, is a magnificent tube of carbon fiber running from the base of the A-pillar all the way back to the rear corner of the roof, adding stiffness and lightness the whole way. More carbon fiber and CFRPs are found throughout the body and frame.

A big advancement in the iX xDrive50 is that the car’s electric motors operate without the use of cobalt. That’s because instead of permanent magnets making the rotor spin around the stator, the motors in the iX spin using electricity alone—what engineers (and your physics teacher) call “electrically excited synchronous motors.” BMW claims its fifth-generation eDrive technology is nonetheless 93% efficient. Goodbye cobalt, at least in motors.

There is still some cobalt in the lithium-ion batteries, but BMW sees to it that the cobalt there is “certified ethically sourced,” just like all of its material. The car’s battery has a gross energy content of 111.5 kWh, with a net energy content—that which is available for use every day—of 106.3 kWh. Its power-per-weight efficiency is up 20% over the previous-gen batteries. This battery pack is mounted low in the floor in an aluminum housing that acts as a stressed member of the chassis. The setup is good for a preliminary estimate EPA range of 300 miles.

On my day’s drive in the iX xDrive50, I easily cleared 125 mph on the autobahn and stayed at that speed as long as traffic would allow. Acceleration was as quick as you want it, with 0-62 mph listed at 4.6 seconds, despite a curb weight of around 5700 pounds. My recording of range on a day’s drive was less than scientific, but trusted colleagues found the range to be within the claimed 300 miles EPA.

Along with BMW’s mainstreaming of electric propulsion, there are many other cool things on the iX xDrive50:

The main point here is that BMW is leaping headlong into electrification, and this is a major advance toward that. The company’s goal is for 50 percent of global sales to be electric by 2030. And if the rest of the coming BMW EVs are anything like this one, I say, welcome electricity.