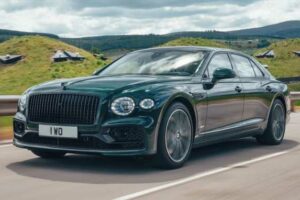 In case you missed it, Bentley won’t be relying on internal-combustion engines for much longer. By 2030, the luxury British marque will no longer sell cars that burn dirty dino-juice (more commonly known as gas or diesel fuel). But before shocking its customer base into buying nothing but EVs, Bentley is weaning them off gasoline with a series of hybrids. First came the gas-electric Bentayga, and now the Flying Spur sedan gets the hybrid treatment for 2022.

Actually, the Flying Spur receives a plug-in hybrid powertrain—think of it as a Bentley-sized Prius Prime. A twin-turbo 2.9-liter V-6 and an electric motor sandwiched between it and the transmission split or share motivational duties depending on the drive mode and the battery’s state of charge. Their efforts combined, the V-6 and the e-motor produce 536 horsepower and 552 lb-ft of torque. The V-6 by itself is actually more power-dense than the Flying Spur’s available gas V-8, kicking out a whopping 150 horsepower per liter.

The hybrid system is fed by a 14.1-kWh lithium-ion battery pack that Bentley says should deliver more than 25 miles of pure electric driving. Those figures are preliminary, however, and Bentley has yet to get that number certified by the WLTP or the EPA. The battery is said to be capable of being fully charged in as little as two and a half hours, depending on the power source it’s plugged into.

Thanks to the punchy V-6 and the extra boost from the e-motor, Bentley says the Flying Spur hybrid will shoot to 60 in 4.1 seconds, just a tenth of a second behind the 542-hp Flying Spur V-8.  Top speed is claimed to be a towering 177 mph.

There are new EV-specific modes in the drive mode selector. EV mode is, as you might have guessed, where the Bentley is forced to rely solely on the battery pack and electric motor to get you up and going. Hybrid mode is for maximum efficiency, and works with the onboard navigation system to ensure the Flying Spur will use the engine and the motor as efficiently as possible before arriving at your destination. Hold mode balances the engine and motor to try and keep the battery topped up for later EV-only use.

Outside, there is hybrid badging—so everyone knows you didn’t splurge on the W12—and inside the Flying Spur will now deliver various bits of information pertaining to how much range you have, the battery’s state of charge, and so on. Beyond the hybrid indicators, the interior is every bit as opulent and customizable as the one in the regular Flying Spur.

There’s no word on pricing, but you can expect the Flying Spur Hybrid to start at well over $180,000 when it reaches U.S. shores. Customers can begin ordering their hybrids now, with the first deliveries expected by the end of this year.