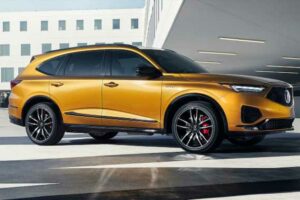 Equipped with Acura’s torque-vectoring all-wheel-drive system (dubbed Super Handling All-Wheel Drive or SH-AWD by the Japanese brand) and a 10-speed automatic transmission, the sportiest iteration of the MDX promises to improve upon the standard model’s dynamics, an AWD version of which we clocked accelerating from 0-60 mph in 5.7 seconds. To complement the more powerful engine of the MDX Type S, Acura fits the most potent variant of its mid-size SUV with Brembo-sourced front brakes and a trim-specific Sport+ drive mode.

Despite its sporting pretensions, the MDX Type S maintains the less powerful MDX SH-AWD’s 5,000-pound maximum towing capacity. Acura intends to show off the SUV’s hauling abilities by having a 2022 MDX Type S tow one of its TLX Type S race cars from Raymond, Ohio to Pikes Peak, Colorado, where the competition-ready sedan is due to take part in the 2021 Pikes Peak International Hill Climb.

While Acura’s revealed much of what separates the 2022 MDX Type S from its lesser 2022 MDX kin, the brand remains mum on the vehicle’s price and feature content. Nevertheless, Acura notes it plans to share more information about the model as the Type S-badged SUV’s late 2021 on-sale date draws closer.