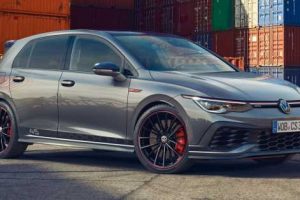 The first ever Volkswagen Golf GTI made its debut 45 years ago. What started out as a limited production hot hatch (only 5,000 units were originally planned) turned into a cult favourite that sold in excess of 2.3 million units today. So, to celebrate its birthday, the Golf GTI Clubsport 45 was created.

As the name implies, the exclusive edition model is based on the Golf GTI Clubsport, and so power comes from the same EA888 evo4 2.0 litre turbocharged four-cylinder engine that makes 300 PS and 400 Nm. A seven-speed DSG dual-clutch gearbox sends drive to the front wheels, helping it do the century dash in under six seconds.

Being a Clubsport model, it sits 15 mm lower than a standard GTI, and is slightly softer sprung to cope with the Nürburgring Nordschleife’s undulating surfaces. There’s also the fifth “Special” drive mode, increased positive camber at the front axle, and larger rotors. In terms of looks, the Clubsport 45 gets its roof and rear spoiler painted black, which is an homage to the black-framed rear window of the first Golf GTI. Also on is the Race package, featuring the 19-inch Scottsdale alloy wheels with Tornado Red pinstripe as standard. The Race pack also includes a sports exhaust system and the removal of the Vmax limiter.

The number 45 is featured on the side sill panels, and the GTI badge at the six o’ clock position on the steering wheel has been replaced by a 45 badge. You’ll also find GTI letterings on the backrests of the front sports seats. The red accents used in the cabin is pretty much the same treatment you get with the standard GTI Clubsport.