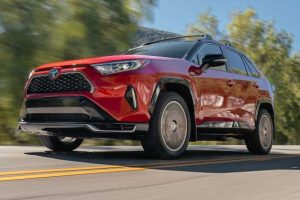 Toyota’s hybrids have been called many things, but “interesting,” “fun,” or “fast,” likely hasn’t been on that list. The 2021 Toyota RAV4 Prime plug-in hybrid SUV changes all that. Not only is it arguably the best hybrid Toyota has built to date, but it’s also the quickest non-Supra Toyota we’ve tested in the past five years, and the most-efficient Toyota on sale today not wearing a Prius badge.

What’s a RAV4 Prime and What Makes It So Quick and Efficient?

The new RAV4 Prime is the plug-in hybrid version of the RAV4. Like the RAV4 Hybrid, the RAV4 Prime sports a 177-hp and 165-lb-ft 2.5-liter I-4 engine mated to electric motors and an e-CVT up front, another electric motor at the rear axle, and a battery pack underneath the rear seats. That’s about where the similarities end. The Prime’s motors are more powerful for starters—its front one makes 179 hp and 199 lb-ft of torque, while its rear makes 53 hp and 89 lb-ft of torque, with a total combined system output of 302 hp (versus 219 hp combined for the RAV4 Hybrid).

The RAV4 Prime also sports a large 18.1-kWh battery, which, unlike the RAV4 Hybrid’s 1.6-kWh battery, can be plugged in. Depending on whether you have the standard 3.3-kW on-board charger or optional 6.6-kW charger (the latter available as part of the $3,765 Premium Package on the top-trim RAV Prime XSE), it can be charged from empty to full in as little as 3 hours on a standard Level 1 120-volt outlet, or in about an hour and a half on a Level 2 240-volt charger. With a full battery, the EPA says RAV4 Prime can motor for 42 miles on electricity before the engine kicks on, giving the SUV a total driving range of about 600 miles. When accounting for both its motors and engine, the EPA rates the RAV4 at 105/84/94 mpg-e, or 38 mpg combined if you never bother to plug the Prime in and treat it like a RAV4 Hybrid.

How Fast Is the RAV4 Prime?

So, to the test track: In the hands of our well-traveled test team, the RAV4 Prime was surprisingly a bit of a handful as it accelerated from 0-60 mph in an impressively quick 5.5 seconds, and on through the quarter-mile in 14.1 seconds at 98.7 mph. “Well, that was unexpected,” said associate road test editor Erick Ayapana, “The RAV4 Prime really made me work to control wheel spin, seeming from the rear axle first, and then the front axle. Regardless, this thing feels strong off the line, good pull from start to the quarter-mile finish.”

The RAV4 Prime’s straight-line performance makes it the second-quickest Toyota we’ve tested in quite a long time—the only vehicle faster has been a 2021 GR Supra 3.0, which needed 4.0 seconds to hit 60 mph and ran a 12.3-second quarter-mile at 115.8 mph (we haven’t tested the Supra GR 2.0 yet, it’ll likely be quicker than the RAV4 Prime, too). Hot on the RAV4 Prime’s heels is the NASCAR-lookalike V-6-powered Toyota Camry TRD. Its best run was 5.8 seconds to 60 mph and a 14.4-second quarter-mile at 99.8 mph.

Somewhat surprisingly given its heavy 4,372-pound curb weight, the RAV4 Prime performed admirably in our braking and handling tests. In the former, it needed 127 feet in our 60-0 mph emergency stop test, and in the latter it lapped our figure eight in 27.0 seconds at 0.65 g average.

How Does the RAV4 Prime Drive?

Out in the real world, the RAV4 Prime is probably the most impressive Toyota we’ve driven since piloting a Land Cruiser through Moab, Utah. Simply, put—it just works. And works well.

With a full battery and left to its own devices in its “Auto EV/HV” (Electric Vehicle/Hybrid Vehicle) drive mode, the RAV4 Prime easily hits its 42-mile EPA-estimated range, and it feels like a big, comfy electric SUV doing so. Power delivery is relatively quick, and even with the engine off, the Toyota’s motors never leave you wanting for power. With the engine on, the RAV4 is seriously quick for an SUV in this class, though as Ayapana noted at the test track, the Prime has trouble delivering lots of power smoothly from low speeds as its electronic brain manages power and torque delivery from three separate sources.

The RAV4 Prime’s suspension is softly sprung, which leads to a fair amount of brake dive and rebounding after impacts, but body roll through bends is well-controlled. Notably, the RAV4 Prime’s brakes manage the transition from regenerative to mechanical brakes smoothly—a balance Toyota has long struggled with on its hybrids. Steering feel is surprisingly tactile and well-weighted.

The current RAV4’s interior has been one of our design favorites in the compact SUV segment, and Toyota leaves well enough alone with the RAV4 Prime. The cabin is comfortable, relatively spacious, and unlike some other mainstream plug-in hybrid SUVs (the Subaru Crosstrek Hybrid, for instance), the battery doesn’t eat into cargo space.

Materials quality was great for our loaded RAV4 Prime XSE’s $42,600 starting price ($49,831 as- tested), though there were a few squeaks and rattles coming from the back of the cabin. A slightly-cheaper RAV4 Prime SE is available, too. It starts at $39,425.

Ignoring its speed, efficiency, and comfort, the best part about the RAV4 Prime is just how seamlessly it all works. It’s exactly as engaging (or disengaging) as you want it to be. If you want to just get in after a long day of work and motor on home, it’ll comfortably and quietly whisk you away. And yet, if a shot in the arm is what you’re looking for, its surprisingly charming 302-hp powertrain ought to be more than enough to wake you up. The RAV4 Prime, then, is not just a great plug-in hybrid, but it’s also a hugely compelling compact SUV that ought to be on the short list for anyone in the market for new family transportation.