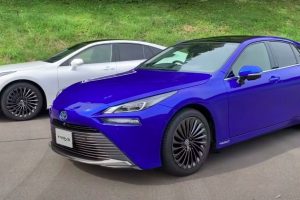 Toyota announced last month that it will be unveiling the second-generation Mirai hydrogen fuel-cell vehicle in December, though it has emerged that selected Japanese journalists have gotten early access to the cars for review.

Toyota has yet to reveal definitive technical specifcations, however the videos by Cliccar and Love Cars TV indicate that the second-generation Mirai produces approximately 182 hp, or 29 hp more than the output from Toyota’s first-generation hygrogen fuel-cell model.

At its unveiling, the second-generation Mirai concept was touted said to offer a 30% increase in driving range over its predecessor to around 650 km, however Japanese reviews said that the new car will go up to 850 km thanks to its three hydrogen storage tanks.

In contrast to its predecessor, the TNGA platform adopted by the second-generation Mirai means it is now rear-wheel drive, and its configuration enables a 50:50 weight distribution front to rear. According to the Love Cars TV video, the Mirai retains the 4,795 mm length, 1,885 mm width and 1,470 mm height dimensions of the Mirai Concept.

Inside, it appears that the dashboard architecture remains as before on the 2019 concept, where a 12.3-inch infotainment unit and driver instrumentation provide visual information. Here, the Mirai can be seen to include features such as a Qi wireless device charger, rear view camera feed, touch panel for rear seat air-conditioning and a folding front passenger seat head rest.

The second row of the forthcoming Mirai offers one more sat for a total of five, though the third rear seat in the middle appears in the video to be compromised by a tall centre tunnel. The Mirai’s fastback exterior shape hasn’t severely compromised rear passenger headroom, however, as there appears to be a scalloped section towards the rear end of the roof to allow for more room.

Earlier this week, Toyota USA indicated on its Facebook post that the 2021 Mirai will be available in the US market in XLE and Limited trim variants, as suggested by the bootlid badges shown in pictures. The company also revealed in the post that the forthcoming model for that market will be available in Hydro Blue, Oxygen White, Heavy Metal, Supersonic Red and Black. More definitive details are expected to surface when the second-generation Mirai makes its official debut next month.