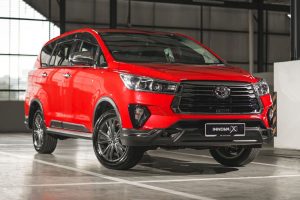 Teased earlier, UMW Toyota Motor (UMWT) has now announced that the order books have opened for the 2021 Toyota Innova facelift, which will go on sale here in three variant forms. Pricing has also been revealed for the refreshed MPV, which made its debut in Indonesia last October.

The MPV has been given styling updates and new features, and additional safety systems are now standard across the range. Exterior changes include a new bumper and trapezoidal-shaped grille with a chrome and black theme as well as new, sharper-looking headlights. The fog lamps and their bezel designs have also been revised, now vertically inclined to better frame the face of the vehicle.

Not much change at the back, with the L-shaped taillights remaining identical to before, with only darkened edges to highlight the clusters. The tailgate trim that bridges the rear lights are now black, and the door mirror covers on the 2.0G and 2.0X now feature chrome housings and integrated turn signals. Elsewhere, the roof spoiler available only for the 2.0X has been reprofiled for aerodynamic improvements.

The 2.0X also comes with additional styling enhancements that are exclusive to it, such as new wheel arch mouldings for protecting the bodywork, new bodyside mouldings and redesigned side skirts. It also gets new dark grey metallic 17-inch alloys.

No change to the powertrain, and so the Innova range continues on with a 2.0 litre 2.0 litre 1TR-FE naturally-aspirated four-cylinder petrol engine. The unit offers 139 PS at 5,600 rpm and 183 Nm at 4,000 rpm, with power being sent to the rear wheels via a six-speed torque converter automatic transmission with sequential shifter.

Inside, the 2.0G and 2.0X are equipped with a nine-inch touchscreen infotainment system with Apple CarPlay and Android Auto connectivity, and the screen also serves as a display for the 3D Panoramic View Monitor (PVM) standard on both variants.

The USB ports on the car have also been reworked – all are now fast charging capable, and the front two ports have been repositioned in the dashboard from the centre console panel, while an additional USB port is now available for third row occupants. Other highlights include second-row captain seats, an eight-way power adjustable driver seat and LED ambient lighting.