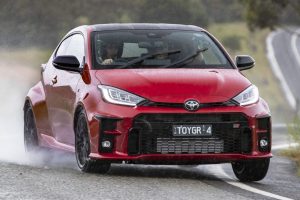 It looks like the Toyota GR Yaris is flying off the shelf in every market it is introduced. On April 15, Toyota Mexico announced that it will be taking pre-orders for the hot hatch. The GR Yaris is priced at 699,900 pesos (RM145k), and customers only need to pay 20,000 pesos (RM4,133) for the pre-order.

In just 24 hours, all 300 units of the hot hatch were snapped up. Other prospective owners can still put down their bookings, but they will be put on a waiting list.

Guillermo Diaz, the vice president of operations for Toyota Motor Sales of Mexico said: “Mexico joins Japan, Australia, Argentina, and Spain as some of the countries that will be able to enjoy that sense of excitement that the Japanese describe as Waku Doki, because next summer it can have the exclusive GR Yaris on its streets.”

“It is a limited edition worthy of collectors and adrenaline lovers,” he added. Unfortunately, the GR Yaris continues to elude the North American market.

To quickly recap, the critically acclaimed performance hatch is powered by a bespoke G16E-GTS 1.6 litre turbocharged three-cylinder engine, touted as both the largest and most powerful three-cylinder in production. It’s also tipped to be the smallest and lightest 1.6 litre turbo around. It comes with D-4S port and direct injection, as well as a single-scroll turbo integrated with the exhaust manifold.

There’s also a special GR-Four all-wheel drive system that’s specifically developed for the car. In Normal mode, the car sends around 60% of drive to the front wheels and 40% to the rear, whereas Sport mode has a 30:70 split to add some RWD handling characteristics. Track mode dials it back to 50:50 for maximum performance. The system also comes with a rear-axle disconnect function that allows drivers to yank the (manual) handbrake to slide into a corner.