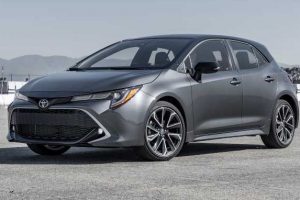 Hot hatchbacks get all the love. Rightfully so; hot hatches such as the venerable Volkswagen Golf GTI and Honda Civic Type R can deliver enthusiasts a driving experience that rivals “proper” sports cars, without sacrificing the usable versatility of a roomy hatchback. The GTI and Type R are excellent vehicles, but plenty of drivers are better served by a less expensive, more efficient hatch that offers both a comfortable ride and a fun driving experience.

Enter the 2021 Toyota Corolla Hatchback. Not a hot hatch, a warm hatch. It rocks an available six-speed manual transmission (with a detail even Porsche doesn’t get right) and is only offered with the Corolla’s gutsier four-cylinder, plus a reasonable cargo area and styling like a retro-future rally car. Warm hatches seem to be falling by the wayside as the Ford Focus, Hyundai Elantra GT, and standard Volkswagen Golf exit the North American market. This little Toyota illustrates why that’s a darn shame.

The Corolla Hatchback’s track test results help place this car on the hatchback heat spectrum. Motivation from the naturally aspirated 2.0-liter I-4’s 168 hp and 151 lb-ft of torque help scoot the little ‘Yota from 0 to 60 mph in 7.3 seconds, with our best results obtained by dumping the clutch at 3,000 rpm.

For context, the last Corolla sedan with the base 139-hp 1.8-liter I-4 and a continuously variable automatic transmission (CVT) we tested took a pitiful 10.2 seconds to reach the same speed, while a CVT-equipped Corolla Hatchback with the same 2.0-liter as our test car needed 8.5 seconds. We’ve recorded a properly hot Civic Type R hatchback reaching 60 mph in as little as 5.0 seconds and a warm Civic Sport Touring doing so in 7.1 ticks. In most situations, this Corolla feels quick enough.

The numbers the Corolla Hatch laid down on the test track are respectable but that’s not really the point. As lovely as its midcorner balance at the limit feels, this sort of characteristic will only be experienced by a small subset of warm hatch buyers. Meanwhile, anyone who plants their derriere in the driver’s seat will appreciate the details Toyota executed oh so well.

First off, the shifter. The knob is more elevated than most short-shifted hot hatchbacks and that has the benefit of superb ergonomics. It’s on the same plane as the nicely padded, leather-lined center armrest, placing it exactly where your hand naturally falls. For bonus points, it’s also a quick six-inch reach from your right hand’s position on the steering wheel, calling to mind the nicely positioned console-mounted shifter of a 2002-2003 Honda Civic Si.

The shift action feels great, too. The tall shifter doesn’t result in overly lengthy throws, and slotting into each gear requires enough effort to feel mechanical but never so much to feel like a chore. Clutch feel is a big miss, though. The third pedal is exceedingly light and vague in its engagement, enough so to cause a few instances of unintended wheelspin and a stall or two. We will say we appreciated the auto-off electric parking brake; the alternative is a near-constant annoyance, as in our long-term manual Mazda 3.

That bit about Porsche we mentioned earlier? We’re talking about the Corolla’s auto rev-matching feature. It’s not just that the Toyota can quickly and accurately match rpms for an easy downshift under braking (automakers including Porsche have gotten that part right since Nissan introduced the tech on the 2009 370Z), it’s that the Corolla includes a physical button just behind the shifter that allows you to turn the feature on and off. (Porsche frustratingly keeps rev-matching on by default, and turning it off requires the car to be in a specific drive mode—and, even then, you have to find the hidden control.)

This is part of what makes the Corolla an excellent warm hatch; it’s an accessible entry to enthusiastic driving. Drivers can choose if they’d rather experiment with learning to heel-toe rev-match during downshifts, or keep things mellow and become more familiar with shifting their own gears. We were initially quick to shrug off any need for such wizardry as heel-toe-perfecting wannabe Stigs (it’s worth noting the pedals are perfectly spaced, and the accelerator is plenty responsive for such maneuvers), but when we found ourselves driving across the city wearing clumsy hikers in place of our usual tidy white sneakers, it was a godsend.

Driving up in the canyons, the Corolla felt genuinely fun. Even at altitude, the engine delivers sufficient power as long as you’re willing to wring it out. That handling balance Walton mentioned inspires real confidence, limited only by the Corolla’s conservative tires. The choice of rubber no doubt prioritizes efficiency (which is excellent at an EPA-estimated 28/37/31 mpg city/highway/combined) and quiet comfort (also largely excellent) over outright grip, but with a little more stick, this hatch would be able to hang with the big boys in the twisties.

All that said, the Corolla Hatchback would be an outright failure if it traded dynamic joy for impracticality in everyday use. Big surprise coming from the company that built its reputation on practical commuters: That’s not the case.

This year, Toyota addressed one of the Corolla Hatchback’s most significant drawbacks. Whereas prior Corolla Hatchbacks’ cargo areas suffered from a high load floor and consequently minimal space, the 2021 model benefits from a new no-cost option to ditch the full-size spare. The result? An increase of cargo capacity to 23.0 cubic feet from 17.8 cubes. Rear legroom measures just 29.9 inches, 4.9 inches fewer than the Corolla sedan, but we were pleasantly surprised to have no issues fitting behind this author’s 6-foot-1 self’s driving position. There’s even plenty of headroom, but the sloping rear windows that help define the Corolla Hatchback’s sporty profile can make the space feel claustrophobic.

Up front, Corolla Hatchbacks are fitted with nicely bolstered sport seats wrapped in rad two-tone fabric and leatherette upholstery with contrast stitching. They’re a little wide but comfortable, even after a few hours. The 8.0-inch touchscreen infotainment system is relatively responsive despite some dated-looking graphics, and Apple CarPlay functionality works well. We especially appreciate the matte plastic trim piece running below the display where we could anchor our thumb for more accurate touch inputs.

This Corolla will treat you well on your daily commute, too. It rides smoothly without gut jiggle or head toss, even on big-ish 18-inch wheels, while the car’s relatively short wheelbase was only apparent on especially choppy sections of freeway. The standard adaptive cruise control system delivers human-like brake application, but the lane keeping assist tends to bounce off lane lines and occasionally crosses over them without warning. Similar lane centering tech from Honda and Hyundai is much more confident.

What a pleasant surprise this turned out to be. Of course, the enthusiast in us knows the Corolla Hatchback would make for a better canyon companion with stickier tires, better clutch feel, and another 50 hp. Even so, it excels as an accessible entry point to driving enthusiasm that just so happens to be a comfortable, versatile daily commuter. That it stickers for just over $25,000 only sweetens the deal. For what it is, one of a dying breed of affordable warm hatchbacks, this little Corolla is awesome.