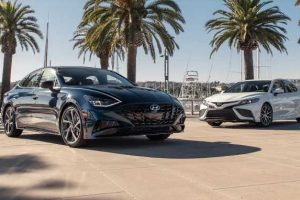 There remains a strong offering of midsize sedans on the market today, despite the unwavering juggernaut known as the SUV craze. While American automakers have all but abandoned ship, manufacturers like Toyota, Hyundai, Honda, Subaru, Mazda, Kia, and Nissan continue to roll out new models and update existing ones. In Toyota’s case, it capped 2020 by touting its Camry as the best-selling passenger car in the U.S. for the 19th consecutive year, with sales topping 294,000.

As always, the Camry faces a steady lineup of challengers. Hyundai launched a new Sonata for 2020 with a fresh, stylish design intended to punt the midsize sedan into the heart of the conversation. Toyota, for its part, refreshed the three-year-old Camry for 2021, which encompassed some exterior and interior design revisions and more available equipment. We pitted a 2021 Toyota Camry SE against a 2021 Hyundai Sonata SEL Plus to discover which of these family sedans deserves the most attention irrespective of their sales legacies. (Hyundai moved 77,000 Sonatas in 2020, only 26 percent as many Camrys sold.)

Camry vs. Sonata: Which Is Nicer to Sit In?

It is important to note the fact Hyundai sent us a 2021 Sonata in the more upscale SEL Plus trim compared to the near-base-model 2021 Camry SE supplied by Toyota. The Sonata SEL Plus carries a base price of $29,305 compared to the Camry SE’s $27,480. What’s more, our test Sonata’s $2,700 optional Tech package brought desirable features such as a panoramic sunroof and a larger touchscreen compared to the standard 8.0-inch unit. As-tested prices for our contenders: $29,217 for the Toyota, $32,174 for the Hyundai.

Speaking generally, the new Sonata delivers ample interior space, with plenty of real estate for rear passengers. We were disappointed to note a fair amount of creaking from the sunroof, but the interior’s overall execution is something buyers who dig some personality in their car will appreciate.

The Sonata’s cabin is far fresher in design terms compared to the Camry—or even most of its competition in the midsize sedan class. Soft, flowing lines and curved edges work in its favor. In a vehicle class where boring interiors are common, the Sonata is cohesive while others are jumbled and/or outright dull.

We liked the shape, materials, typeface, and action of the Sonata’s buttons. The same goes for its excellent, intuitive, and easy-to-navigate infotainment user interface, and we appreciated its practical storage and cubby spaces. It’s a nicer place to spend time in compared to several other family sedans, again regardless of equipment.

Some of our test drivers thought Hyundai tried a little too hard to make a sporty-looking, emotionally pleasing interior. For example, the asymmetrical steering wheel might look cool, depending on your personal taste, and it has chunky thumb grips. But it’s not the most comfortable wheel to use due to sharpish edges in places, making it as funky ergonomically as it is aesthetically. Still, more than one of our testers said the Hyundai does a great job of making a “budget Mercedes” in terms of ambiance, presentation, and feel.

Likewise, the 10.3-inch infotainment touchscreen was pleasant to use, even if some of its graphics appear a touch dated. The system reacts quickly to commands, and its integration helps deliver a clutter-free center console and clean look. The Hyundai also comes with a digital instrument cluster that provides a bit of theater via different animations and graphics when you switch between drive modes and functions, another nod to more premium products.

Sit in the rear seats, and you find excellent amounts of leg- and shoulder room, and it has more headroom than you might expect in a car with a sloping rear roofline. However, although front passengers have access to two USB slots and a 12-volt power plug, rear passengers must share a single USB port.

The 2021 Toyota Camry SE inspired little enthusiasm from our evaluators, even as we recognized this car, as equipped, was much closer to “rental-fleet spec” than our Sonata.

At first glance, you find some likable features in terms of value, from leatherette seats with cloth inserts to three USB ports up front to standard automatic climate control. A new-for-2021 7.0-inch touchscreen works well and is a big improvement compared to previous Toyota offerings, but it looks tiny compared to those found in the Sonata and in many other competitors.

Rear passengers will feel neglected, however, thanks to zero USB ports or air vents, the latter a glaring omission in terms of modern comfort. On the other hand, the rear-passenger space is large, with lots of leg-, shoulder-, and headroom.

Ultimately, the Camry’s interior design, touchpoints, materials, and style—especially compared to the Sonata—don’t live up to its relatively sporty exterior design, which features aggressive rocker panels; blacked-out badges, trim, and taillights; and a rear spoiler. The car simply looks much nicer on the outside than it is on the inside. And, as one of our test drivers noted, while the Sonata’s materials are mostly middle of the road, many of the Camry’s plastic bits—stalks and buttons—feel like they might break easily even if they won’t. The infotainment display’s graphics also drew criticism for being ugly.

Camry vs. Sonata: What About Safety?

Both the Hyundai Sonata and the Toyota Camry boast overall five-star crash ratings from the government’s National Highway Traffic Safety Administration. However, the Sonata scored four stars for driver-safety performance in a frontal crash, whereas the Camry received five stars. Each model scored five stars in the other key crash-performance categories. The Toyota is also a Top Safety Pick+ by the Insurance Institute for Highway Safety, while the IIHS ranks the Hyundai as a Top Safety Pick.

Each car comes standard with several desirable safety assistance systems, including lane keep assist, blind-spot alert, intelligent cruise control, and forward collision assistance with pedestrian detection. In the Camry’s case, Toyota updated its Toyota Safety Sense tech package for 2021, adding pedestrian alerts and an alert that warns of oncoming vehicles when you perform a left turn at an intersection.

During our test drives, the Sonata’s lane keeping system was inconsistent. It often performed quite well, but also often seemed to take a long time before recognizing the car was deviating from its lane. The Camry performed marginally better in this regard, but it also often seemed late to the game with its intervention.

Our performance tests revealed two evenly matched sedans, the Camry just edging the Sonata in just about every main category. It accelerated to 60 mph in 7.5 seconds compared to the Sonata’s 7.8 and reached the quarter-mile mark in 15.8 seconds at 90.4 mph against 16.0 at 87.5 mph. The Toyota stopped from 60 mph in 122 feet versus 126 feet for the Sonata. Both cars posted an average lateral g measurement of 0.85 on our skidpad, while they were virtually identical in our figure-eight test: The Sonata posted a lap of 27.0 seconds at an average of 0.64 g, and the Camry did it in 27.1 at 0.63 g. Put it this way: If you buy a Camry and your neighbor buys a Sonata, neither of you will have much ammunition to support any brags about carrying the bigger stick.

This category isn’t clear cut, either. The Sonata SEL Plus feels sportier in terms of its firmer suspension setup, but our test drivers split opinions on whether this is a good thing. Some of them moaned repeatedly about its ride quality, noting how it crashed over certain types of bumps and transferred too many vibrations into the cockpit, especially at low speeds.

Even when not hopping over bumps, Hyundai’s family sedan seemed to always telegraph a fair amount of grainy “road noise” through drivers’ rear ends, resulting in an overall more “agricultural” feel than was present in the Camry. We also felt more vibration through the steering wheel at idle than we did in the Toyota.

Conversely, the Sonata also felt less floaty and more buttoned down than the Camry when driven hard, though, as noted, its performance in our handling tests revealed no tangible benefit to its stiffer suspension tuning.

Our staff’s varied opinions about the ride quality mostly followed party lines: Our drivers who look for sporty feel and more direct response to steering inputs—even when testing everyday sedans—preferred the Sonata’s setup and praised its damping and quirks, while those who prioritize sheer comfort and who don’t mind a lack of character in this class cast their vote to the Toyota. We also noted a fair amount of wind noise, especially at freeway speeds, around the Sonata’s exterior mirrors; it stood out because everything else was so quiet.

The Camry’s suspension didn’t control its body as well, and it too exhibited vibrations and rattles over bumps. Overall, though, it was slightly softer and less chattery, a fact some drivers liked just as others were not fond of the chassis’ more pronounced vertical motions that seemed to occur as a result.

Camry vs. Sonata: Which Is Better?

Ultimately, the 2021 Hyundai Sonata SEL Plus gets our nod over the 2021 Toyota Camry SE. Its combination of interesting if not beautiful exterior styling, superior and fun interior design and appointments, and more involving character were too much for the Camry to overcome. Yes, the Toyota we tested boasted a $2,957 price advantage, but it didn’t deliver enough extra value and user satisfaction to overcome the fact that the Hyundai delivers a more holistically compelling package and experience.