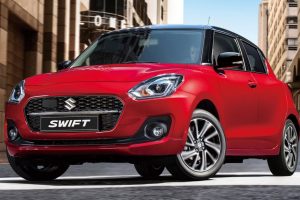 The 2021 Suzuki Swift facelift has landed in the UK, nearly four months after making its debut in Japan. This time, all 1.2 litre models are augmented with a 12-volt mild-hybrid system as standard, which reduces carbon emissions and improves fuel consumption.

A compact and lightweight 12-volt hybrid system features a belt-driven Integrated Starter Generator (ISG; puts out 2.3 kW and 50 Nm of torque), which assists the engine during acceleration and helps recoup energy via regenerative braking. A new 10 Ah lithium-ion battery replaces the older 3 Ah unit, too.

When equipped with a manual transmission, the front-wheel drive Swift Hybrid is claimed to consume just 4.1 litres of fuel per 100 km (WLTP cycle), and emits 111 grammes of CO2 per km. With a CVT, it would do the century sprint in 12.2 seconds. Theres also an AllGrip Auto permanent all-wheel drive system available as option, but it is only available on the range-topping SZ5 manual variant. Again, it uses the same K12D hybrid powertrain, which yields an average fuel consumption of 4.5 L/100 km and 123 g/km of CO2.

The Swift Sport continues to be powered by a 1.4 litre turbocharged petrol engine, which has been updated with a 48-volt mild-hybrid system earlier this year. The total system output is 129 hp and 235 Nm of torque, numbers which are good for a century sprint time of 9.1 seconds and 210 km/h top speed.

Visual upgrades for the facelifted Swift are identical to that of the JDM model, and so features the new meshed grille design with a thin chrome strip, slightly revised headlights, new wheel designs, and additional paint colours, such as the Flame Orange Pearl metallic. The pillars have also been blacked out for a slightly sportier finish. LED headlights are now standard for all. Inside, all Swift models get a seven-inch touchscreen info display with Apple CarPlay and Android Auto as standard. An SD card-based GPS navigation can be had as an option.