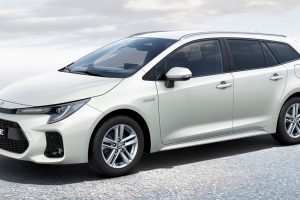 Looks familiar, doesn’t it? This is the new Suzuki Swace, which is essentially a rebadged version of the Toyota Corolla Touring Sports wagon sold in Europe. This is the second vehicle to be supplied to Suzuki by Toyota after the RAV4-based Across, as part of a collaboration between both carmakers.

Don’t think of the partnership as being one-sided, as Suzuki also makes cars for Toyota, including the Glanza that is based on the Baleno. More recently, there’s the Urban Cruiser, which is a tweaked version of the Maruti Suzuki Vitara Brezza in India.

The partnership with Toyota is also beneficial to Suzuki, as it allows the company to have products that comply with the European Union’s tightening CO2 emissions regulations. The ruling states that from 2021, phased in from 2020, the EU fleet-wide average emission target for new cars will be 95 g of CO2/km. Not too long ago, the Jimny was pulled from Europe and reintroduced as a light commercial vehicle because the small off-roader dragged down the brand’s fleet average CO2 emissions in the continent.

As such, the Swace and Across – with their hybrid powertrains – are a quick way for Suzuki to lower its fleet-average CO2 emissions, and avoid facing penalties in the process. It’s a logical move, and one that isn’t that alien if you remember that Aston Martin once sold the Cygnet for the same reason, which is a rebadged iQ.

Like the Across before it, the Swace does get some styling tweaks beyond just the Suzuki badge at the front. For starters, the lower apron is a lot simpler in appearance, with none of black trim seen on the Toyota version.

You’ll also notice the black trim piece between the headlamps no longer extends to the meet the grille, as it no longer needs to accommodate the Toyota logo. Meanwhile, along the corners of the front bumper, faux intakes have sprouted for a wider-looking stance, and these are where the fog lamps are located.

At the rear, the Suzuki logo replaces the Toyota one as you’d expect, but everything else remains pretty much untouched. The same applies to the interior, with just the steering wheel boss receiving the “S,” while the rest of the cabin is identical to a Corolla Touring Sports.

Only one powertrain option is available for the Swace, which is a 1.8 litre hybrid with 122 PS and 142 Nm of torque. The system includes a 2ZR-FXE four-cylinder Atkinson-cycle engine, an electric motor (72 PS/163 Nm), a 3.6-kWh battery and an e-CVT. The car comes with Normal, Eco and Sport drive modes, along with an EV mode that lets it run on battery power alone.