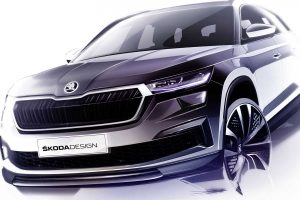 The fastest seven-seat SUV at the Nürburgring is about to undergo cosmetic surgery.

After revealing a couple of regional models – Octavia Pro for China and Kushaq for India – Skoda is now planning a global debut. The company’s largest SUV will be going through the typical mid-cycle facelift, bringing discreetly redesigned LED lights at the front and rear. Design sketches preview the updates the Kodiaq will receive on April 13 when the big bear is going to be revealed in full.

The Superb facelift was the first model from the Czech brand to receive matrix LED headlights before the technology trickled down to the latest-generation Octavia. Although not mentioned by Skoda yet, logic tells us the Kodiaq is about to receive the high-tech headlights that automatically adapt depending on incoming traffic.

Beyond the headlights, which by the way are slimmer than before, there are more changes at the front. Skoda has redesigned the hood and made tweaks to the corporate grille, giving it a more upright, hexagonal look with double vertical slats. In addition, the bumper now incorporates a wider lower air intake flanked by L-shaped elements and adorned with a fake aluminum insert.

At the back, the LED taillights have redesigned graphics with a flatter version of the traditional C-shaped pattern. Skoda says the rear lights look slimmer than before to mirror the changes made at the front, and we’re expecting the bumper to be slightly different as well. New alloy wheel designs and fresh paint options should round off the changes on the outside.

Still the fastest seven-seat SUV at the Nürburgring, the 2021 Skoda Kodiaq facelift will come along with “technological enhancements.” The Mladá Boleslav brand isn’t going into any details yet, but we’re expecting the firm’s latest and greatest infotainment along with a wider array of safety kit. The VW Group’s cleanest 2.0 TDI Evo will be offered, and logic tells us there’s going to be a plug-in hybrid variant as well.

It’s safe to say the Kodiaq has been a huge success, generating more than 600,000 sales since its launch in 2016. The Kodiaq is seen as the brand’s first true SUV as the funky Yeti was more of a tall, upright hatchback while the Skoda-based Trekka designed and built in New Zealand in the 1960s was more along the lines of a utilitarian vehicle.