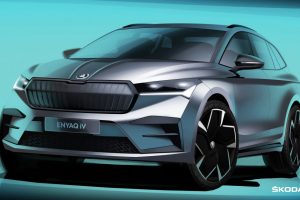 Skoda has released the first two official sketches of the Enyaq iV, which is the company’s first fully electric model based on the Volkswagen Group’s MEB platform. Yes, folks, you’re looking at yet another full electric SUV, and this one is set to be unveiled in Prague on September 1, 2020.

The Czech automaker’s design chief, Karl Neuhold says the team aims to redefine the aesthetics of electric SUVs with its Enyaq iV. While familiarly Skoda, the design is far from generic. “The Enyaq iV features sculptural lines, clear surfaces and crystalline elements” that are inspired by Bohemian crystal art, Neuhold says, adding that the SUV features a shorter front end and an elongated roofline for a more dynamic appearance.

He considers the design highlight to be the fascia. Up front, the six-pointed Skoda grille is completely shut off, improving aerodynamics. It’s also set further forward and more upright for a bolder look, whereas the Matrix LED headlights are underscored by upticked LED DRLs.

Over to the side, there seems to be a strong emphasis on outward visibility, with huge apertures for the windscreen and windows. Skoda’s trademark tornado line continues to feature prominently here, and the profile is furnished with door-mounted side mirrors, roof rails, and massive wheels. At the back, sharp angular lines adorn the rump of the Enyaq iV, and the registration plate is positioned just below the Skoda script. Interestingly, the drag coefficient value of this SUV is 0.27 Cd, which is rather impressive.

While there are design similarities between Skoda’s new EV and its regular internal combustion engined-models, Neuhold said the biggest differences include the height of the vehicle, as well as the front and rear overhangs.

“To save space, the batteries of the MEB are installed in the vehicle floor, which makes the body a little higher. However, the longer wheelbase makes up for this visually. The individual components of the electric drive take up less space than a conventional internal combustion engine, allowing for shorter overhangs at the front and rear,” he explains.

Check out the interior sketch, here

No technical details have been revealed yet, but the MEB platform currently offers three battery sizes, starting with the 55-kWh unit that juices a 109-kW (148 PS), rear-mounted electric motor rated at 148 PS. This is good for a range of 340 km on a single charge.