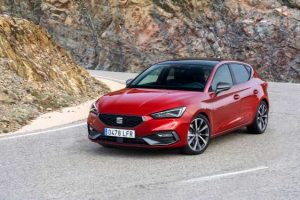 Just a few weeks after the last Volkswagen Golf MkVII rolled out of the Puebla, Mexico plant—and we found out the new MkVIII model wouldn’t be coming Stateside—the fourth-generation Seat León has arrived in the Latin-American country. The Seat León and Volkswagen Golf have long shared their architecture, powertrains and interior design, and this sophisticated-looking new generation is no exception. It is based on the new eighth-generation Golf that America won’t be getting (sigh), making the León the closest we’ll get to the beloved regular-grade German hatchback—both literally and figuratively.

Make no mistake, we’re happy we’re getting the MkVIII-based Golf R and GTI on our shores, but in Mexico, where it’s likely the regular Golf will be sold, too, the new León is roaring. Introduced on Tuesday night, when preorders opened up, Seat Mexico announced on its website the following morning that the first units of its hatchback had sold out.

Par for the León Course

The León is one of Seat’s core pillars, generating more than 2.2 million sales worldwide since its inception in 1999. Designed and developed at Seat’s headquarters in Martorell, Spain, the fourth-generation León is based on the same new MQB Evo architecture as the MKVIII Golf. Around the globe, Seat will equip its hatchback with a diverse range of engines that includes gasoline, diesel, mild-hybrid, plug-in hybrid and natural gas mills.

In Mexico, customers will initially get a turbo 1.4-liter four-cylinder that delivers 150 hp and 184 lb-ft of torque—essentially the same engine that powers the MkVII Golf (and the related four-door Jetta sedan) in America; the more powerful 190-hp 2.0-liter turbo will be available towards the end of the year. An eight-speed automatic is the only transmission available, and like in its VW cousin, the transmission sends torque to the León’s front wheels.

The updated León adopts Seat’s new sophisticated design language that was first previewed in the Tarraco—the Spanish Tiguan, which we drove a little over a year ago. Its front end incorporates a bigger hexagonal grille flanked by swoopy headlights with elegant daytime running lights. The hood and front fascia incorporate strong character lines that give the hatchback a stronger appearance.

The profile has swifter lines that naturally flow towards the rear, where the taillights replicate the same design as the headlights but are connected by a thin light strip that runs across the hatch. Dual exhausts give the León a sportier presence from the back, and while its shape is similar to the Golf, the León’s rear lateral window cuts up towards the C-pillar, giving the Spanish model an altogether cockier vibe than the relentlessly rectilinear, traditional-looking Golf.

Inside, its clearer to see the VW Group DNA. A floating infotainment screen sits atop the central air vents and is available in two sizes—8.2- or 10.0-inches—and both support Apple CarPlay and Android Auto. Borrowing the Golf’s controversial nubby shifter, the León’s center console is clean and minimalist, with HVAC controls hidden below the infotainment screen. A digital instrument panel is optional, while ambient lighting adds character to the cabin. Although rear legroom has increased a bit compared to the outgoing model, cargo room remains the same.

Globally, Seat offers different types of safety technologies but in Mexico the León arrives with an austere package. Neither of the two trims available—Style and FR—will offer active safety features like its Golf cousin, meaning adaptive cruise control, blind spot monitoring, automated emergency braking, and lane keep assist are off the table.

We’re still sad the eighth-generation Golf will not touch U.S. soil in its most basic form, and the new Seat León deepens that feeling. Rumor has it Mexico will even get the León Sportstourer, the wagon variant, which makes us want to visit our neighbors to the south ASAP.