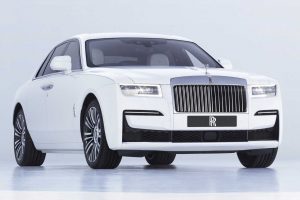 The $330,000, ‘entry-level’ Roller moves to the company-exclusive Architecture of Luxury.

If you ever see the redesigned 2021 Rolls-Royce Ghost on the street, you’ll be forgiven if you mistake it for the outgoing model. As Rolls-Royce’s most successful product in history, the Ghost is crucial to the automaker, so designers altered the formula only slightly, even though the only parts shared between old and new are the door umbrellas and Spirit of Ecstasy hood ornament.

Engineers, however, were given free reign to enhance and update the entry-level Rolls-Royce. As such, the outgoing Ghost’s BMW-based bones are done for. While the previous model kept lots of hard bits in common with the previous-generation 7 Series sedan, the 2021 Ghost now rides on the dedicated Rolls-Royce Architecture of Luxury – a distinction shared with the Cullinan SUV and Phantom flagship. For the record, the Ghost’s starting price of $332,500 befits its upmarket betfellows, up $20,600 over the current sedan.

Pursuing “Post Opulence,” minimalist vibes for the new Ghost, Rolls-Royce pursued a pared-down aesthetic throughout the car, and we think they largely succeeded. Gone is the outgoing sedan’s wrap-over radiator shell, with the iconic Rolls-Royce grille shape relegated entirely to the nose of the car. This design choice also forced the company’s Spirit of Ecstasy hood ornament to abandon her former post atop the chrome shell, and now she lives on the leading edge of the hood surrounded entirely by sheet metal.

The rest of the 2021 Ghost’s styling is similar to the outgoing model, with a few key differences. The front end is smoother, with a single-frame lower air intake that curls up at the edges and dovetails into little chrome strakes. Gone are the current Ghost’s standalone turn signals, and the 2021 sedan distinguishes itself further with upswept headlights that recall the Phantom.

Compensating for the grille’s smaller and smoother contours is a set of LED illuminators mounted behind the strakes, shining down and illuminating the grille from behind. In fact, Rolls felt that the first iteration of this feature was too garish, so designers dulled the finish of the vertical spars’ trailing edges to give the reflected light a softer, more luminous quality.

The side profile of the 2021 Rolls-Royce Ghost doesn’t change much. There’s a “waft line” along the bottom of the car that recalls boat design, but otherwise, the Ghost doesn’t get too much frippery – we say that’s a good thing. Rolls-Royce says that the front and rear windows are equally proportioned, befitting the entry-level sedan’s status as both a driver’s car and a chauffeured limousine. Of course, the thick C-pillar and privacy-screened rear quarter glass clearly suggest the latter.

The sedan’s stern takes the lion’s share of styling changes, with a faster rear roofline, angular tail lights, and a softly rounded trunklid that recalls both the Phantom sedan and the nautically themed Swepttail one-off coupe. Minor details like beveled window trim and revised wheel designs round out the new Ghost’s exterior alterations – overall, the sedan looks clean and sleek, though some might wish for more visual drama à la Bentley Flying Spur.

The 2021 Ghost doesn’t share much with the outgoing sedan, and nowhere is that more obvious than in the interior. The interior ditches the old sedan’s somewhat busy, squared-off styling for a design that’s more avant garde and minimalist than the current Phantom or Cullinan. While the dash still features prominent vertical elements on the extreme left and right sides, they’re better integrated into the wider, flatter dashboard top.

The wing-shaped wood trim of the Phantom carries over to the Ghost, although in the smaller sedan, the lower dashboard is less monolithic, giving it an airier and sleeker appearance. The center console is better-integrated on the Ghost as well – where the Phantom’s upright seating position and prominent center console armrests remind us of classic luxury sedans, the Ghost is far more modern and sleek. With 20 half-hides (does that equal 10 cattle overall?) coating both visible and hidden interior bits, the Ghost should still be appropriately cushy.

The center console houses the most recent iteration of the company’s infotainment controller (think BMW iDrive, but with Rolls-Royce graphics), and the Ghost gets fully digital gauges with a vintage, timeless design. The company hasn’t officially announced how large either the gauge display or infotainment screen is, but they each appear large enough to be functional. Of course, Rolls has never gone overboard with electronic doodads, and even their old analog gauges occupied a rather small space in the dashboard. That’s still true of their digital equivalents.

The one significant area where designers gave into glitz is the dashboard fascia. When the car’s off, the panel looks like a large piece of gloss black trim, underlaid by a single-plank piece of wood trim. But thumb the starter and the black panel lights up with a softly illuminated “Ghost” wordmark surrounded by more than 850 individual “stars.” Rolls-Royce says the panel is meant to enhance and recall the company’s existing Starlight Headliner.

Befitting the company’s insistence on overengineering, the illuminated dashboard fascia isn’t merely made up of a hidden screen behind a translucent panel. Instead, the pinpricks and lettering are etched into a piano black substrate, over which is overlaid a dark-tinted lacquer that hides the illumination when not in use. The piano black panel is topped off with a layer of lightly tinted lacquer that’s polished to a uniform, 0.5-millimeter surface with a high-gloss finish.

One other bauble that must be noted: While Rolls-Royces of the recent past have offered electric-closing doors, the 2021 Ghost now gets electric-opening doors as well. The occupant pulls once on the interior door handle to activate the system, then pulls and holds the handle until the door is satisfyingly open. While this mechanized doorman is undoubtedly cool, we wonder how long it’ll be before an inattentive occupant accidentally opens the door into a nearby parked car, not realizing the electric mechanism is operating until it’s too late.

If the interior and exterior appear understated, the Ghost might as well be an iconoclast, mechanically speaking. Still powered by a V12, the 2021 Ghost gets a 6.8-liter unit that boasts 563 horsepower (420 kilowatts) and 627 pound-feet (850 newton-meters). As such, the new V12 is a bit more powerful and a lot torquier than the outgoing 6.6-liter unit, and it hustles the 5,628-pound sedan to 60 miles per hour in just 4.5 seconds.

All that power yields some prodigious thirst for fuel, expectedly. The company plans on achieving 12 miles per gallon city, 19 highway, and 14 combined in EPA testing. An eight-speed automatic transmission and all-wheel drive modernize the littlest (but still big) Rolls-Royce.

Perhaps most importantly, the 2021 Ghost migrates from a chassis shared with the previous-generation BMW 7 Series to the company-exclusive Architecture of Luxury. Along with that significant alteration, which should imbue the Ghost with an upmarket sense of occasion, the sedan’s suspension is also revitalized with an unusual damper on the front upper wishbone. This world-first technology provides even greater suspension control, allowing engineers to fine-tune the ride for comfort without sacrificing stability.

The upper wishbone damper, which will not spread to other BMW Group vehicles for now, joins a cadre of self-leveling, high-volume air suspension bits and electronically controlled dampers at all four corners. The suspension takes orders from a road-previewing Flagbearer system that reads the road surface through a stereo camera and actively softens or firms up individual wheels as appropriate to prevent untoward body motions or harsh impacts. A steerable, five-link rear axle and GPS-aided transmission controls further improve ride comfort and response.

Even at a lowest-for-Rolls price of $332,500, the Ghost is still an object for the super-rich and the super-rich alone, even outstripping the aforementioned Bentley Flying Spur by more than $100,000.

And we have to admit, at that price it’s hard to imagine the sort of customer who would opt for the Ghost over the larger and more imposing Cullinan, whose base price is only $250 more. The Cullinan is also shorter, but boasts more interior and cargo room. And if Rolls-Royce’s estimated fuel economy for the Ghost is accurate, the Cullinan will even be more efficient (if only just), at 12 city, 20 highway, and 14 combined mpg.

Of course, there are those for whom an SUV will never be as graceful and stylish as a luxury sedan (even if it’s an SUV as decadent and delightful as the Cullinan), and for them, there’s the Ghost. Its formal and understated styling is more attractive than either the Cullinan or the Phantom, to this author’s eyes at least. And an array of surprise-and-delight features should make the folks who sign on the dotted line – and the folks who drive the signatories around – very happy.