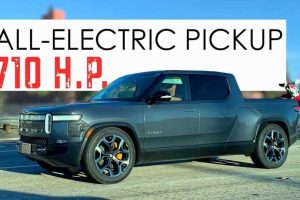 With the electric pickup truck’s launch looming, testing on public roads seems to be ramping up.

To say that the Rivian R1T was spied, spotted out testing, or caught without camo is kind of silly at this point. This is because Rivian hasn’t worked to keep its future electric vehicles under wraps. On the contrary, it has been exceedingly transparent for some time. However, as more people see the adventure-ready electric pickup truck out testing on public roads, the more Rivian’s journey edges closer to reality.

We visited Rivian’s Michigan location over two years ago, and the company was already allowing people to see its electric pickup truck up close, inside and out. However, since the company has existed for many, many years without bringing a vehicle to market, some people doubted whether Rivian would be able to get the funding needed to pull its plans off.

Since then, the startup electric has received a large amount of funding and support from the likes of Amazon, Ford, and many others. It also has a working factory in Normal, Illinois, which was previously used by Mitsubishi.

Rivian has shared a long list of exciting videos on its YouTube channel, making nearly every detail about its R1T electric pickup truck and R1S three-row SUV clear to the media and prospective buyers. Perhaps its most significant achievement was “Long Way Up,” a 100-day, 13,000-mile journey from the far reaches of the southernmost tip of Patagonia in South America all the way up to Los Angeles, California.

Rivian is set to begin deliveries of its R1T electric pickup truck this summer. Do you think it can pull it off? Will the R1T be the first all-electric truck to come to market, potentially many months ahead of the Tesla Cybertruck and GMC Hummer EV? Share your wisdom with us in the comment section below.