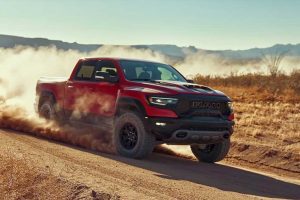 It’s finally here in all its glory, Ram’s long-awaited, much-anticipated contender to the Ford Raptor’s OEM high-speed off-road throne, the 2021 Ram 1500 TRX. But for fans of the Ram truck brand, or of off-roading in general, the TRX has been in the works for years now, ever since the original concept truck was unveiled in 2016. We caught up with the 2021 Ram TRX’s exterior-design lead, Mike Gillam, ahead of the TRX’s unveiling to see what has changed in the intervening four years.

Gillam is the perfect interview subject for our quest, as he was part of the team that designed, developed, and built the original TRX concept. He also led the production TRX’s exterior design.

What changed from the original TRX concept to the production 2021 Ram 1500 TRX, in terms of design and hardware?

[The TRX concept] had a lot of relatively familiar cues on it—the headlamps, we used a grille off of a heavy-duty Power Wagon. It had that very pronounced drop-fender look to it. And really, when you go to the production truck, we actually went the opposite direction on the front. The truck is 88 inches wide. So, we just decided we were going to use a graphic that would play up the entire width of the truck.

So, you’ve got this actually very flat-brim brow that goes all the way across the front of the truck, that creates this super-wide graphic. This is a down-the-road, very ferocious-looking front end that you can see from a mile away and you know it’s not a garden variety Ram truck. So that’s one of the biggest differences you’ll just notice from a visual standpoint.

The other thing, too, that was cool, that I think is even better on the production truck than the concept, is we found a creative way to integrate the ID lamps. So, you’ve got those three ID lamps that have to be on any vehicle that’s more than 80-inches wide. And as I said, since we’re at 88 inches, we had to put them on all of the TRXs.

And on the show truck, we actually had them on the roof, similar to what we would do on a heavy-duty. We thought it works and it’s cool, but it’s kind of HD territory. So, we found a more creative way to integrate them into the functional hood scoop. You’ll see those three ID lamps that are in the functional hood scoop and then we integrated the clearance lamps, those corner markers down into the flares. You’ll see on the front, there’s amber ones on the front that are down, located on the sideburns on the bumper. And then on the rear, they’re located in the flares.

Thirdly, the concept has a side exhaust. We thought that was cool for the concept, but we went back to just a straight rear-exit exhaust. It’s dual exhaust with big five-inch, matte black-painted, dual-wall exhaust tips. So, they’re pretty mean-looking and pretty stout.

And that was just about functionality. Because to do a side exhaust, you’ve got to route—and you’ll see it if you look closely at the show truck—you’ve got to route that exhaust underneath the frame rail to get it outboard of the frame rail. And it does impact your ground clearance a little bit. And especially on a truck that does all the stuff that this truck can do, you don’t want any kind of fragile exhaust pipe getting into any impact zones. So, we wanted to keep it high and up and out of the way. So that was the reason we went back to more of a rear-exit exhaust strategy on the production truck.

Is there any chance those orange marker lights in the scoop can be animated for a KITT-style effect?

MG: I don’t see why not. I think, in the future, I’m sure that people would have aftermarket ideas about how they would want to light-up the truck or have some sort of a greeting type of thing where it lights up in some sort of animated way.

I think from a regulatory standpoint, while you’re driving, when the vehicle is in motion, they’ve got to be lit all of the time. So you probably can’t animate them while you’re driving. But while the truck is sitting still, yeah, I would think you could.

With a truck like the TRX, a lot of what you‘re doing with the design is there to make room for the truck’s mission—it is form following function to a high degree. But is there still room for design around those parameters? Or does the focus on the function become part of the design language itself?

MG: This is one of those programs that any time you have a high-performance program, you’re going to have form following function. But it’s one of those things where it’s a very fun program to work on because the goals of the designers and the goals of the engineers hit those high-performance watermarks, they’re aligned more than they are on other programs. Because the thing that makes a car or a truck look cool—the stance, the proportion—all of that is amplified by the engineering requirements. So really, our job was actually easier on this truck, because these are all the things that we want to do to other trucks, anyway. It was like eating pancakes. You don’t get that on most programs, you have to use a lot of design devices to fake-in body-side drama or whatever to trick the eye. We didn’t really have to do any of that with this truck.

The concept was obviously shown with the 575-hp version of the supercharged 6.2-liter HEMI, so a forced-induction setup has always been part of the TRX’s formula. But is there any possibility or room in the TRX image for a naturally aspirated engine?

MG: That’s a good question. It remains to be seen. I think, TRX, I know it’s going to make a splash, and the fun thing about being part of it on the Ram team is that it’s a first for Ram, entering into this extreme off-road space with a truck like this.

I think once we put that stake in the ground with the general public, I think they’re really going to, much as they always do, they’re going to tell us, hey, what if we did this? What if you guys did this? Hey, maybe there’s some opportunity over here. I think just like we were with the concept truck, our ears are open and we’re pretty close with our customers. We listen to them and we take what they say seriously, and we really do investigate a lot of those ideas. Can’t rule any of that out.

Let’s talk Easter Eggs in the TRX’s design. How many are there, and what are they? We’ve heard there’s a fun one in the center console—perhaps involving a T-Rex and a Raptor?

MG: There’s more on the interior, I’ll tell you that. [The one in the console is] not exactly a T-Rex eating a raptor. I think it’s a scale chart. It’s a fun comparison in [the] scale of a human being with the truck and the T-Rex and a raptor that’s molded into a portion of the center console.

There is one on the exterior of the truck, it’s actually under the hood, and you have to take the engine cover off to see it. So, anybody that wants to go and do that when they get a chance will see the one that’s under there. And that one is probably a little bit more in line with the one that you were talking about—if I don’t give away too much.

Running the quarter mile in 12.9 seconds is crazy for a big off-road truck, Hellcat engine or not. But what we want to know is, has anyone put drag radials on it to see what it can really do?

MG: I don’t think anybody’s put drag radials on it, to my knowledge. I think everything that’s done is stock condition. I don’t even know what the quarter-mile time is. I know its 0-60, but I didn’t see the quarter. I know, for a truck that’s a full-size truck, it’s pretty wild. It’s pretty fun.

What are you proudest of in the design of the new TRX?

MG: I was very proud that the design office led that concept truck, and we led the build; we went out and we found a group of young guys that were very passionate about building desert runners. They were out in California and we enlisted them to help us fab-up the suspension system that was on the show truck.

I was very proud of the fact that the design office really led on both the design and the engineering side a little bit, to put a stake in the ground of what the truck should be. Often, when there’s a vacuum of vision amongst a larger group of people, the design office can take that opportunity in the chaos and go and stake something in the ground and create this vision.

And then a lot of times, nine times out of 10, it’s like “must be present to win.” If you’ve got something that everybody can put their hands on and look at, you’ve just won the day. And really, I do credit that show truck and the speed at which it was done, and the things that we did, some of the fundamental foundations that we laid on it, or the learnings that we had. Because you’re right, it was a fully functional truck. It was the first mule in a lot of ways. It laid the foundation for what the production truck became.

I don’t think that we would have had as much success on the production side if we hadn’t had that concept truck out there for everybody to put hands-on and be in agreement on that this is the direction we needed to go. We wouldn’t have known—the show truck told us—that we had to move the front axle forward 20 millimeters. I’m sure if we hadn’t done the show truck, that would have been sort of an ugly surprise in the middle of the [production TRX development] program, and people would have gotten nervous and maybe we wouldn’t have got the tire diameter that we needed—or the suspension travel—and things might have gotten watered down.

So really, I do credit the show truck with sussing a lot of that stuff out in the broad strokes, early on, so the production program could run pretty smoothly toward the vision.