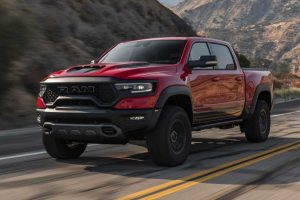 No matter what FCA tells you, it had one goal and one goal only when it created the 2021 Ram 1500 TRX: make the world forget that the Ford F-150 Raptor even exists.

Ford deserves bedloads of credit for sparking the factory-baked desert-runner craze that’s taken the pickup segment by storm. But with a 702-hp engine, advanced suspension technology, and the bones of our 2019 Truck of the Year-winning Ram 1500, the TRX aims to be the world’s first true supertruck.

Given how Ford has approached the F-150 Raptor and Toyota the Tundra TRD Pro (the TRX’s two most direct competitors), you’d be forgiven for thinking that the TRX is little more than a hot-rodded Ram 1500. Truth is, the changes are far more extensive than that.

For starters, the TRX gets a beefed-up frame that’s 74 percent different than that of a standard Ram 1500. It then gets new (relocated) axles, unique 18-inch wheels with knobby 35-inch Goodyear all-terrain tires (custom specced for the TRX), and a game-changing new suspension from Bilstein that combines remote reservoirs and massive 2.5-inch-diameter pistons with electronic valve damping. All of this adds up to the end goal of making the TRX as capable of scrabbling up rocks and soaring over dunes as it is loafing through traffic on the freeway.

Out in its natural environment and let loose in the high-desert scrub surrounding Los Angeles, the Ram TRX feels downright unstoppable. Senior features editor Jonny Lieberman said: “Forget about the engine (just kidding), and concentrate on how when you put the TRX in Baja Mode. It suddenly corners in dirt like a sports car on concrete. And forget about desert running; the TRX is capable of real frame-twisting, hill-scaling, stair-stepping, rock-hopping off-roading, too.”

How could we forget the Ram’s engine? It’s Hellcat 6.2-liter supercharged V-8 has been modified from Dodge and Jeep duty to make it capable of functioning at extreme off-road angles and in both wet and heavy dust conditions. Making 702 hp and 650 lb-ft of torque, the TRX inhales through a new functional hood scoop and a grille with a passthrough Ram logo. It exhales via new exhaust manifolds and X-pipes, the spent air exiting from 5.0-inch exhaust tips tucked up into the steel bumper. In the TRX, the engine is paired with a new high-torque-capacity eight-speed automatic and full-time four-wheel-drive system.

The TRX works just as well on-road as it does off of it. “The way this thing rears back when you floor it is just nutty,” features editor Scott Evans said. “Also, Sport mode turns off the traction control! This truck is insane.” The Ram’s trick shocks mitigate body roll and brake dive while steering remains progressive and accurate despite the truck’s massive off-road tires.

Our test numbers back this up. With a 4.1 second 0-to-60-mph run and a blistering 12.7-second quarter-mile at 106.3 mph, the TRX is the fastest pickup truck we’ve tested since our founding in September 1949.

More than just a speed machine, the Ram TRX handles “truck stuff” quite well, too. Rated to haul 1,310 pounds in its bed or tow up to 8,100 pounds off its rear hitch (that’s 110 pounds more in the bed and 100 pounds more off the bumper than the rival F-150 Raptor), the Ram proved more than capable of shrugging off 5,200 pounds of Airstream behind it.

Flaws? There are a few, and they aren’t small. For starters, some judges didn’t feel like Ram did enough to differentiate the TRX’s exterior design, which is largely based on that of the Ram 1500 Rebel. Building a trophy truck? Make it look like a trophy truck!

It’s also eye-wateringly expensive, with prices starting at $71,690, well north of a Raptor or Tundra in the mid-$50K range. Lastly, there’s its fuel economy: At an EPA-rated 10/14/12 mpg, the Ram TRX is horrendously inefficient. And while, yeah, supercars and pickups are inefficient to begin with, we’re disappointed to see that there’s no hybridization going on in the TRX—especially considering the Ram 1500 comes standard with a mild hybrid V-6 and is available with a mild hybrid V-8.

Even with its atrocious fuel economy, there’s no denying it: The world’s first supertruck is an incredibly impressive engineering feat and yet another notable notch in Ram’s tool belt.