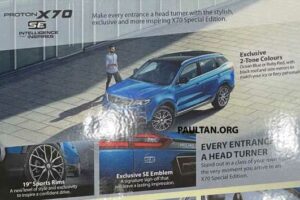 It seems Proton is gearing up to release another variant of its first SUV model, as a reader has provided us with a leaflet of the X70 SE. The document doesn’t reveal if the new offering will be limited in terms of units like the Merdeka Edition, nor does it contain any pricing details.

So, what’s unique about the X70 SE? Well, there’s a new Ocean Blue finish that is not on the current palette that currently consists of Snow White, Armour Silver, Jet Grey, Ruby Red, Cinnamon Brown and Space Grey.

This is paired with side mirrors, a rear spoiler and a roof that are painted black to create a two-tone look, which is something only the X70 Merdeka Edition had previously. If the blue body colour is not to your liking, the existing Ruby Red is your only alternative.

Besides the paintwork, the forthcoming model also receives an SE emblem on the tailgate and 19-inch wheels, the latter similar in design to those on the Geely Boyue Pro and sized the same as the Premium 2WD and Premium X 2WD variants.

There are also some changes to the interior, including exclusive finishing for the trim as well as floor mats with the SE branding. Also new here is the Nappa leather upholstery in black rather than brown in the aforementioned top two variants. The Proton Intelligent Air Purification System (P-IAPS) is also highlighted, although this is standard across the entire X70 range.

The brochure also shows two optional accessories, namely door visors and a digital video recorder (dashcam), although these aren’t new and are already available for X70 variants in the past.

We don’t expect any mechanical changes, which means the 1.8 litre turbocharged four-cylinder engine will continue to deliver 184 PS (181 hp) and 300 Nm of torque, with drive going to the front wheels – the X70 ditched all-wheel drive when it became a CKD model – via a seven-speed wet dual-clutch transmission.