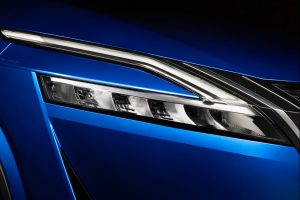 Not content with the unveiling of the new Frontier and Pathfinder today, Nissan will next be introducing the third-generation Qashqai on February 18. From the sole image, the Euro-centric C-segment crossover will get a significant makeover, in line with similar redesigns for the X-Trail and Juke.

Clear to see is the C-shaped LED headlight (replete with the Qashqai script on the body-coloured insert) flanking what appears to be a massive V-motion grille – drawing plenty of inspiration from the Pathfinder and Patrol/Armada. A dramatic vertical slash leading down from the lamp hides a slim vertical air inlet, while the downturned centre intake houses U-shaped fog lights.

Previous official photos of camouflaged prototypes have shown that the new Qashqai will have similar proportions as before, albeit with a more muscular body. That’s because Nissan intends to retain the car’s “just right” dimensions and Common Modular Family (CMF-C) platform. Despite the carryover architecture, the forthcoming model will utilise lightweight construction and will be stiffer than before.

This, together with the retuned suspension, improves ride comfort, steering response and noise isolation. As for the engines, the Qashqai will retain the 1.33 litre turbocharged four-cylinder shared with the latest Mercedes-Benz A-Class, but with the addition of a 12-volt mild hybrid system. The mill will be available in two states of tune – 140 PS/240 Nm and 160 PS/260 Nm (270 Nm with a CVT and all-wheel drive).

There will also be an e-Power range-extended electric model with a 190 PS/330 Nm motor, juiced solely by a 157 PS 1.5 litre variable-compression mill that functions as a generator. Both power sources are significantly more powerful than the 129 PS motor and 79 PS 1.2 litre three-pot found in the Note and Kicks e-Power and should find their way to Nissan’s other larger models in the near future.

Inside, the Qashqai will get a similarly major revamp and will lift many of the toys that made their debut in the Pathfinder. These include a 12.3-inch digital instrument display, a 10.8-inch head-up display and a nine-inch freestanding NissanConnect infotainment touchscreen with wireless Apple CarPlay and Qi wireless charging. Nissan is also claiming increased passenger room, especially at the rear.