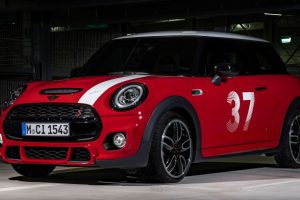 MINI has launched the Paddy Hopkirk special edition model as a way to commemorate its iconic victory at the 1964 Monte Carlo Rally. This edition was created in honour of Patrick “Paddy” Hopkirk, who was 30-years-old at the time when he took the chequered flag in car number 37.

Available in select markets from October 2020, the Paddy Hopkirk Edition is available as the Cooper S 3-Door, Cooper S 5-Door, and John Cooper Works variants. Standard features include the Chili Red exterior paint with white roof, a clear nod to the original #37.

A set of 17-inch John Cooper Works light-alloy wheels in Track Spoke Black or 18-inch JCW Cross Spoke Jet Black can be had, whereas other exterior components are such as the radiator grille, lower air intakes, bonnet “vent” surrounds, door handles, fuel filler flap, tailgate handle, headlights and tail lights surrounds, and side mirror caps are all finished in high gloss black.

Smaller details include the number 37 on the side scuttles, “Paddy Hopkirk Monte Carlo” stickers, as well as a single white bonnet stripe with the race-winning car’s “33 EJB” number plate on the driver’s side. Hopkirk’s signature is also used throughout the exterior and interior of the car.

The MINI Excitement Package and Comfort Access are included as standard. The key fob also gets embellished with the number 37, and customers get to further equip the car with all the options that are offered with the MINI hatch. No changes have been made to the powertrain.

Paddy Hopkirk’s victory in Monte Carlo made him the UK’s most famous rally driver overnight. The MINI that he drove was handicapped in the sense that its competitors were significantly more powerful, but crucial factors such as icy roads, round tight corners and steep slopes gave MINI’s agile characteristics the upper hand. Not forgetting Hopkirk’s driving skills too, of course.