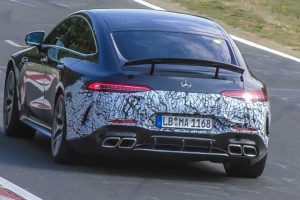 This electrified version of the four-door AMG GT will be the most powerful, with a projected output in excess of 800 horsepower.

Electrification can be used to make an internal combustion-engined vehicle more efficient, but it can also be relied upon to up the power and performance. That’s what Mercedes is expected to do with this AMG GT 73 that was recently spotted while testing around the Nurburgring Nordschleife by statesidesupercars.

Mercedes is believed to unveil the AMG GT73 PHEV before 2020 is over, although we don’t exactly know when. The debut could be pushed back to 2021 as has been the case with many other planned reveals that have been affected by the pandemic.