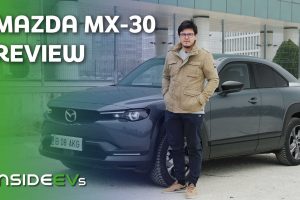 Honestly, if you don’t need an EV with hundreds of miles of range, the MX-30 is actually not bad at all.

Mazda is a small and quite independent automaker that has resisted many of the trends that swept the industry in recent years. It fought off downsizing and turbocharging, and it offered the compact Mazda3 model with a 2.5-liter engine when rivals offered force-fed engines with half that displacement. Then when everybody jumped on the electrification train, Mazda again resisted, but it eventually gave in and created its first proper electric vehicle.

The Mazda MX-30 is a great looking crossover that has a lot going for it, but one major downside – its battery pack is quite small, for a vehicle its size, and as a result, its range is not great. It has a claimed WLTP range of 200 km / 124 miles (or 260 km / 161 miles WLTP City), but if you drive it in winter, like I did, you’re not going to get anywhere near that.

And the MX-30 misses out on another EV party trick: rapid, instant acceleration. With a low-powered motor driving the front wheels, and a claimed nought to 100 km/h (62 mph) time of almost 10 seconds, you will not be blown away by its acceleration. However, with all of the above in mind, I genuinely enjoyed my time with this Mazda and I found a lot to like about it without having to force myself to see the plus points. 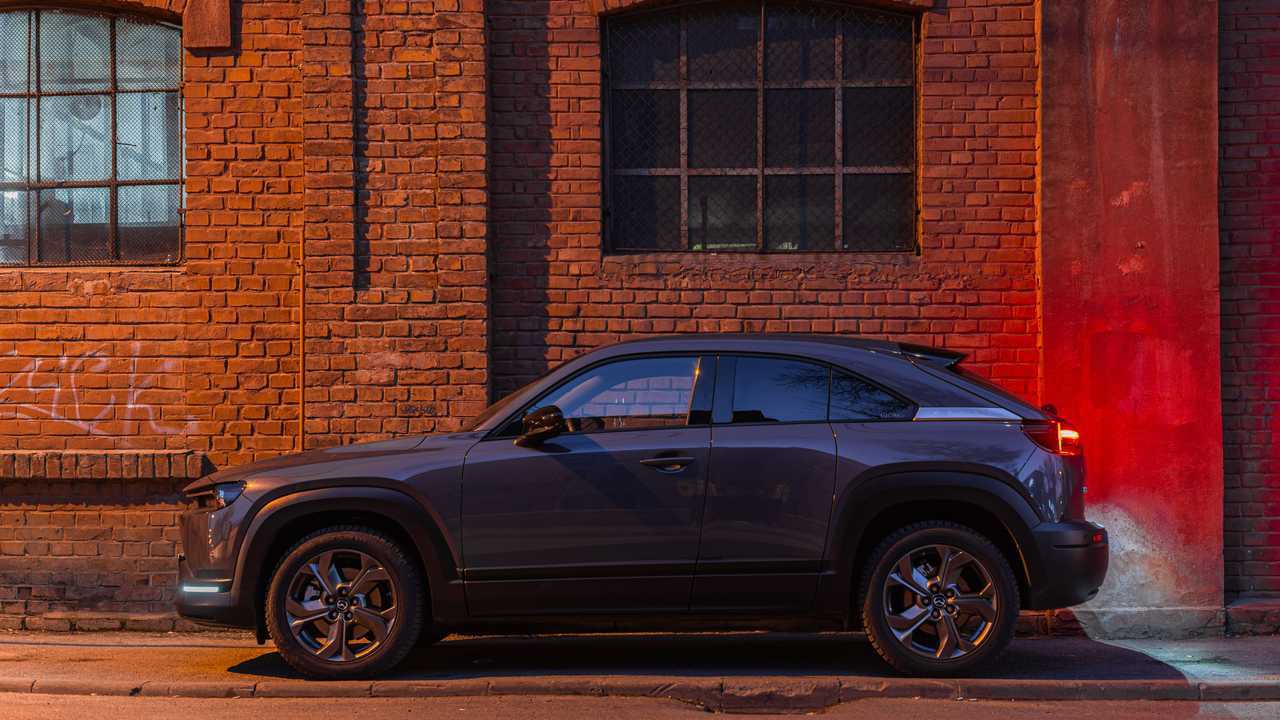 Mazda knew that in order for this model to even stand a chance of causing a stir and become known, it needed to pull out all the stops in terms of design. And I can happily report that the automaker thoroughly delivered – the MX-30 is really unique to look at, but it’s not weird and over the top.

As with most modern Mazdas, the front section is a bit longer than it would need to be. Mazda clearly knows that a long hood is the mark of a premium vehicle (one that has a big, six- or eight-cylinder engine that is longitudinally mounted) and it is giving most of its new vehicles this extended front end. With this being said, I don’t think it looks bad and the vehicle does pull off the trick of looking a bit like a small luxury vehicle.

From the side, you immediately spot two key things: firstly, this is a coupe-like crossover with a roofline that dramatically dips towards the rear. And it even looks like an actual two-door, but if you look closer, you’ll notice that it actually has two (smaller) rear doors that open in an unusual way – they are rear-hinged, like in a BMW i3 or Mazda’s last hardtop sports car, the RX-8.

Move to the rear, and you still notice the dramatic roofline that points you to a set of rear lights that look like they were taken from a recent mid-engined Ferrari model. They are nicely integrated, though, and they look like they belong there. Overall, I think that the MX-30 is a great looking little crossover, one of the better looking ones on the market (particularly among coupe-crossovers), regardless if they are ICE or EV. 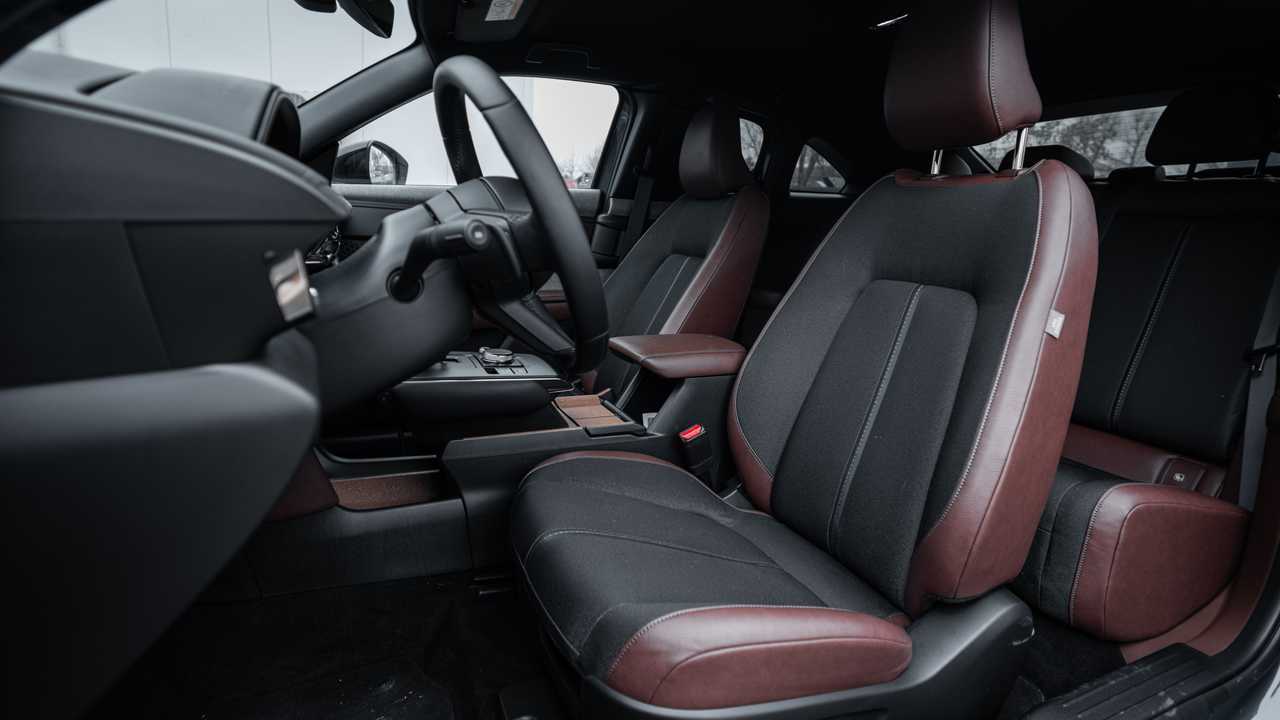 The MX-30 is a surprisingly good long drive companion. The front seats offer excellent comfort levels, with lots of adjustability, as well as a nice, low driving position. It’s one of the few crossovers that I’ve driven where you feel like you’re actually sitting in the car, instead of on it as you do in many such vehicles.

Through the corners, it handles itself more than admirably, with minimal body roll and excellent composure. The suspension is a great compromise between ride plushness and you don’t really feel that the rear axle is quite a basic torsion beam setup – in fact, Mazda’s torsion beam setup is one of the best on the market, regardless of model, when it comes to ride comfort. 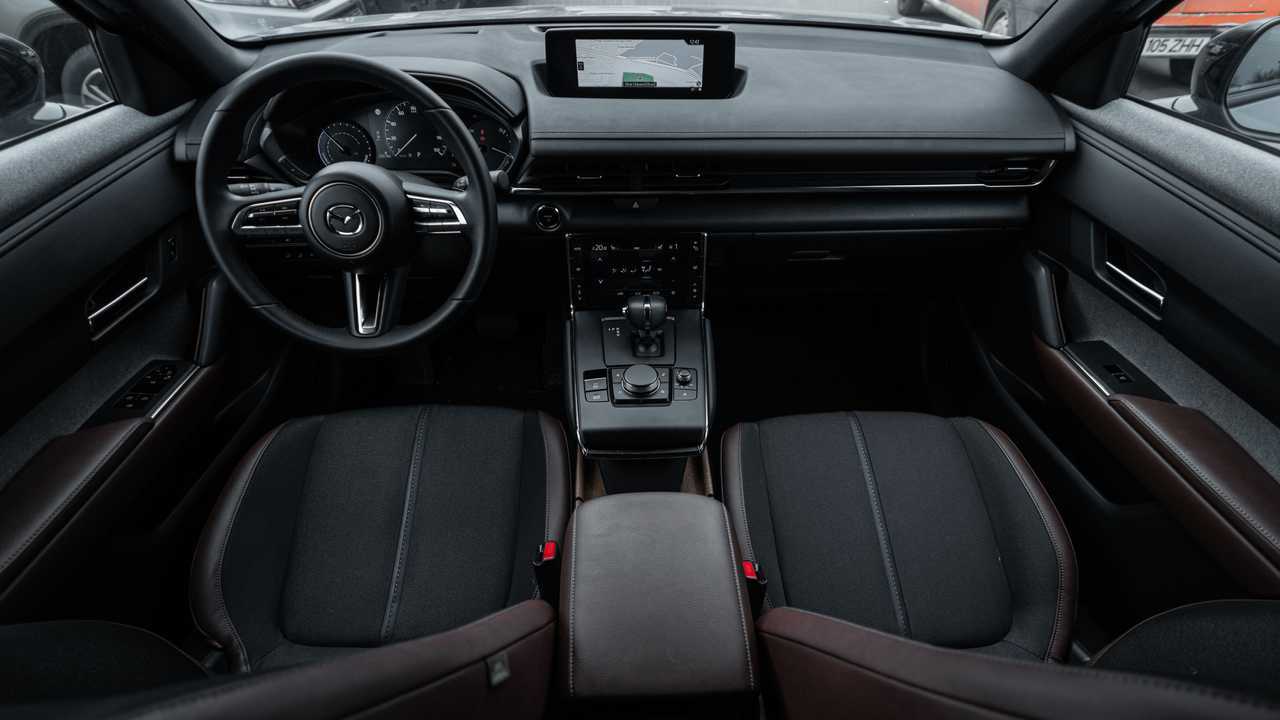 The MX-30 gets Mazda’s latest infotainment, called Mazda Connect, and while it’s not special in any way, it is a good, competent system that’s easy to pick up and intuitive. It’s not quite as in-depth as some other infotainment solutions on the market, but it’s not really lacking in any area. If, however, you don’t like the standard operating system, you can use Android Auto or Apple CarPlay, both of which are wireless.

Mazda also offers a connected app, called MyMazda, that tells the user useful pieces of information about charging, the state of charge and range, it allows the preconditioning of the car and remotely adjusting climate settings, as well as lock or unlock the vehicle.

The head-up display fitted to my tester was also a particular highlight. It is not one of those cheap-looking HUDs that rely on a separate plastic screen – this one projects all the information onto the windscreen itself and the graphics are very sharp and clear, and it’s also sufficiently bright so that you can see whatever it projects, even in very bright conditions.

The car comes as standard with full LED headlights, although you can optionally spec matrix LED lights (which my tester did not have). It also gets single-zone electronic climate control as standard, which you can control either through the dedicated touchscreen or through physical buttons on the sides. 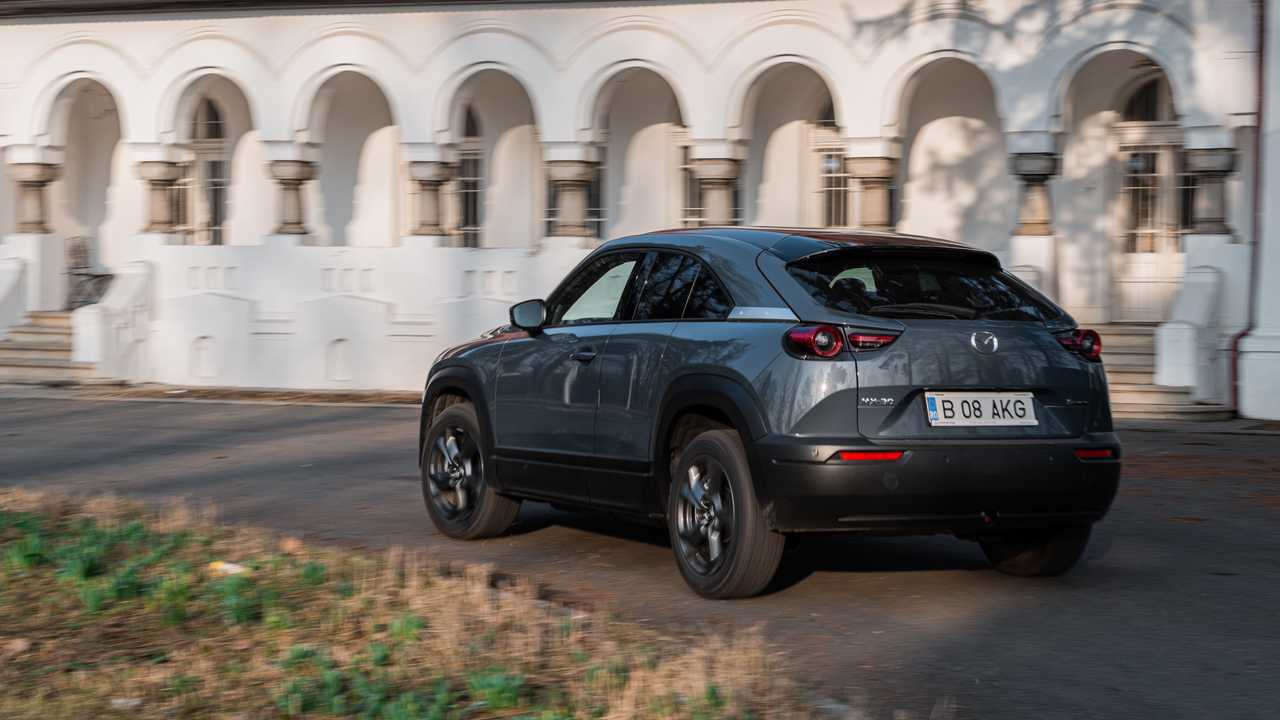 Driving the Mazda MX-30 was a much more enjoyable experience than I would have thought. Sure, it’s still a relatively tall crossover, but thanks to its relatively low weight (for an EV its size; it weighs 1,720 kg or 3,790 pounds), it is surprisingly agile and chuckable. Like all EVs, since its battery is heavy and located very low in the vehicle, its center of gravity is low, so the vehicle also feels especially planted through the bends, even when you push hard.

It is considerably more fun on some twisties than it is on a straight piece of road. That’s because with just 145 horsepower and 270 Nm (199 pound-feet), it takes 9.7 seconds to reach 100 km/h (62 mph) – this makes it one of the slower EVs on the market, but with that being said, you actually won’t feel like you’re driving an underpowered vehicle.

And with the fake acceleration sound being piped into the cabin, you’ll actually feel like you’re making more progress than you actually are. It’s certainly an interesting, unusual and fun driving experience for a front-wheel drive crossover that doesn’t have all that much power on paper. 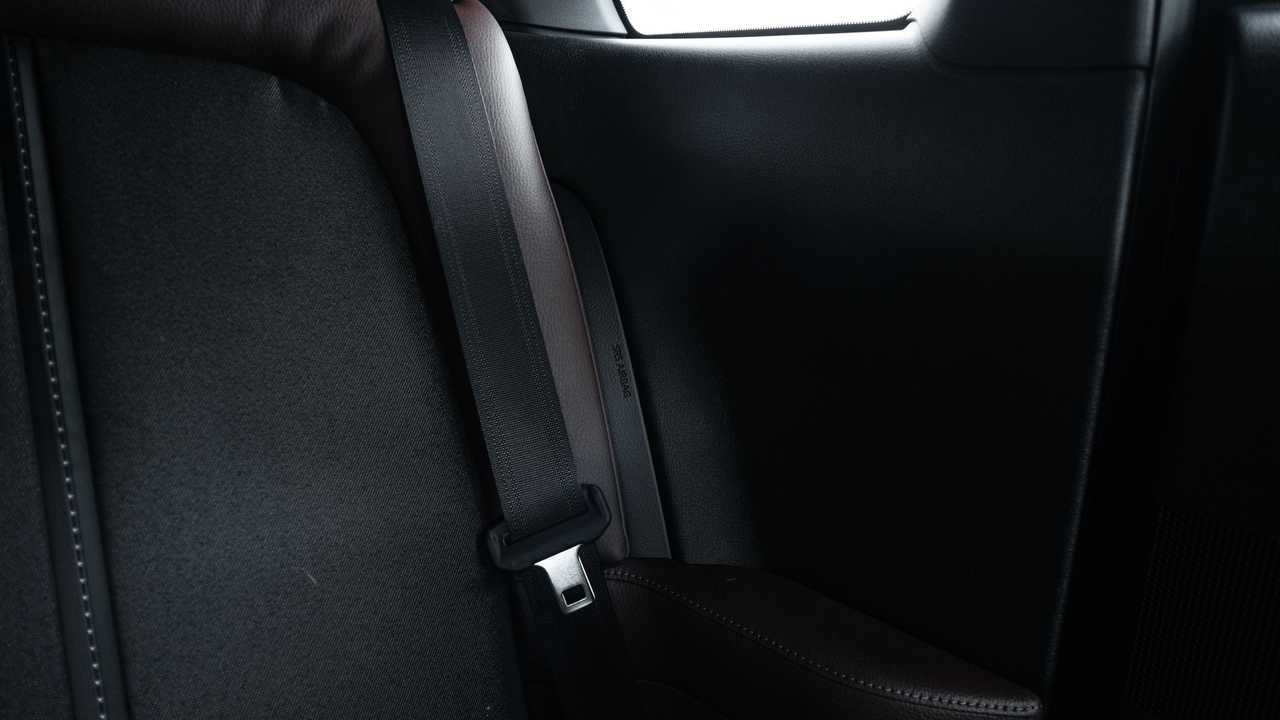 According to EuroNCAP, the MX-30 is a remarkably safe vehicle, which is why it was awarded the maximum five-star rating. It scored 91 percent for Adult Occupant protection, 87 percent for child protection and 73 percent in the Safety Assist category. It has airbags in all places you’d expect to find them in a modern car, even the driver’s knee area (although there is no passenger knee airbag), as well as autonomous emergency braking and adaptive cruise control with a lane keep function. 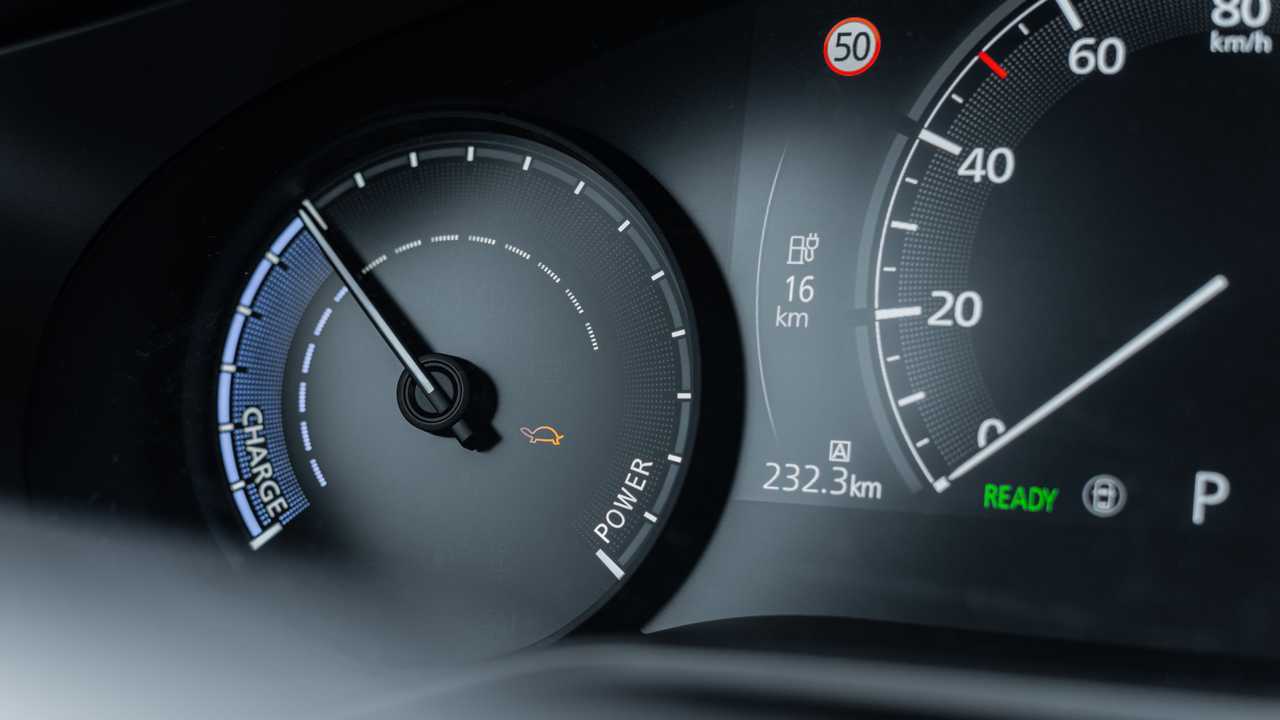 During my drive of the MX-30, a big part of which was the highway range test, my tester averaged 21.4 kWh/100km, which equates to 2.9 miles/kWh. That is quite a bit off the claimed 14.5 – 19 kWh/100km. Its efficiency may have been worse than advertised because I drove it in quite chilly winter conditions with temperatures not much above freezing, and I also conducted the aforementioned 70 mph range test.

In said range test, I managed to drive the MX-30 on the highway at a constant speed for just over 135 km or 83 miles. This, again, is quite a bit off what Mazda claims, but it is a reasonable result given the size of its battery pack and the discrepancy between my recorded range and the manufacturer claim.

When it comes to charging, the first time I tried hooking the car up to a 50 kW charger, it didn’t properly fast-charge. It would do so for about a minute, then the rate of charge would slow to a crawl, and I had to stop and restart charging – I did this dozens of times and then connected it to a slow charger until it reached 100 percent.

The very next day, I went back to the exact same charger and I had no problem taking it from 18 percent to 100 percent in a little over 30 minutes – this is close to the manufacturer claim, suggesting it was charging at its maximum 50 kW, or close to the maximum. If you charge it via a wall box, expect the battery to be fully charged in around 8 hours, while from a standard 220V outlet (the kind we have in Europe), it will take 14 – 15 hours to reach 100 percent. 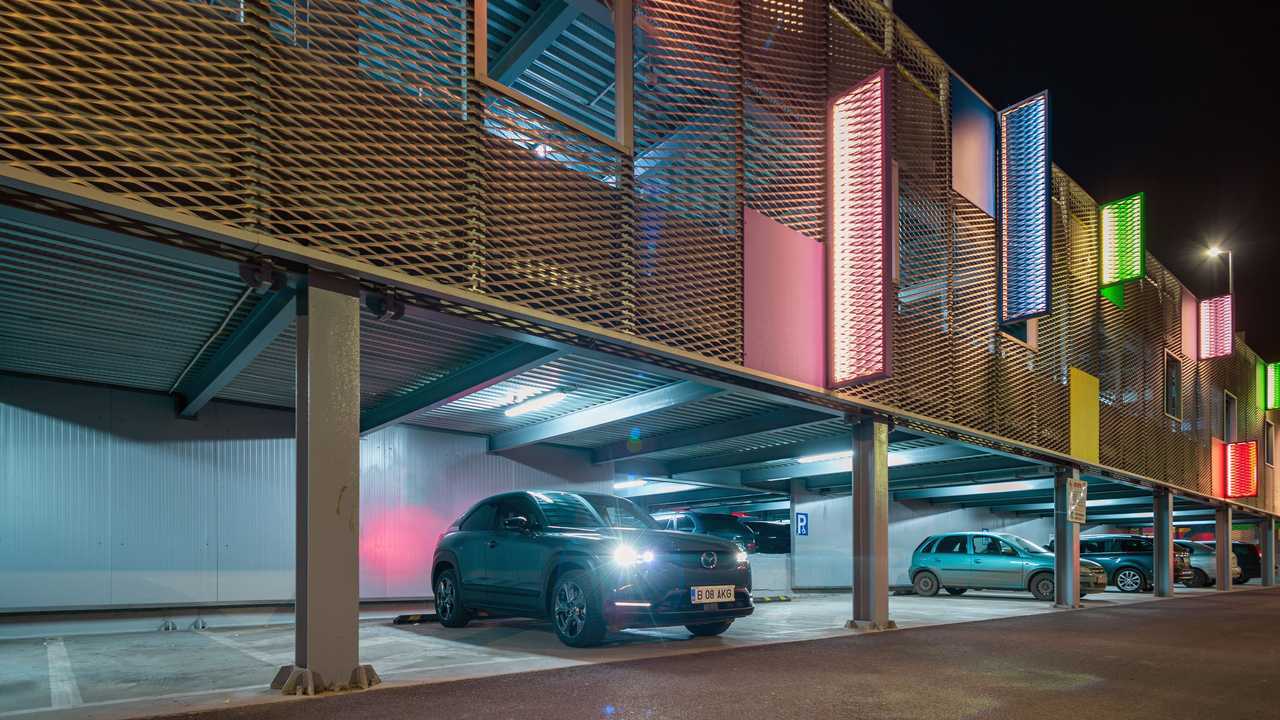 Before getting to drive this vehicle, I really thought I was going to have to make excuses for its shortcomings, so as to not give it too negative a review and ruin my relationship with the local arm of Mazda. However, I don’t have to compromise my journalistic integrity or sugar coat anything, because aside from the limited range, the MX-30 is actually a great car.

It’s very unique to look at, its interior is equally unique (if a bit compromised for carrying rear passengers), it drives really well, it has all the tech features you’d want and I don’t think this is going to be a very common vehicle; you’ll also have exclusivity.

My tester cost €33,400, but it was not a top of the range model. With the local government incentive factored in, you can actually get it for closer to €24,000 and at that price, it really starts to make sense. It’s still not cheap, but then again the vehicle itself gives off premium vibes, particularly inside, and you won’t fell like you’re short-changed if you get one.

It’s currently not available in the United States, but it will be relatively soon – it is expected to debut for the 2022 or 2023 model year and it won’t just be available as a pure BEV, but a range extender model too (whose generator engine will be a Wankel rotary, in true Mazda tradition).