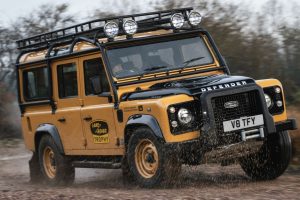 Heroes get remembered, but legends, like the original Land Rover Defender, never die. Land Rover Classic has announced the Defender Works V8 Trophy for an exclusive three-day competition that will take place at Eastnor Castle later this year. Just 25 units will be built as a tribute to its “enduring expedition legacy.”

All 25 models are based on the re-engineered 2012-2016 Defender Works V8. The engine is a 5.0 litre naturally-aspirated petrol unit developing 405 PS at 6,000 rpm and 515 Nm of torque at 5,000 rpm, with drive sent to all four wheels via an eight-speed ZF automatic transmission (pistol shifter).

Its suspension, steering and braking components have also been upgraded specifically for off-road use. Also on are a two-speed transfer box, heavy-duty front and rear differentials, and torque-biasing centre differential.

Available in a mixture of 90 and 110 Station Wagon guises, the V8 Trophy is sold exclusively in this unique Eastnor Yellow paint with matching 16-inch steel wheels. Contrasty bits come courtesy of Narvik Black paintwork, which are used on the wheel arches, bonnet and rear door. LED headlights are standard for the best visibility.

As mentioned above, the limited edition Defender will be participating in an off-road competition later this year, which is where customers will get to drive their cars for the first time. Expert one-to-one tuition will be provided as part of the adventure. In the UK, the starting price for the 90 is £195,000 (RM1.09 million).