2021 Kia Sorento for the US – three-row SUV offered with four powertrains, six- or seven-seat layouts – paultan.org 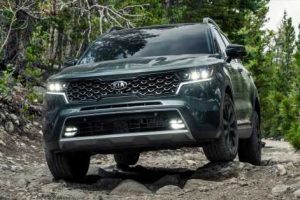 Following the debut of the fourth-generation Kia Sorento in March, the three-row SUV has now been announced for the United States. Expected to go on sale later this year for the 2021 model year, the Sorento will be offered in five trim levels – LX, S, EX, SX and SX-Prestige – with pricing to be revealed later on.

The latest Sorento rides on Kia’s N3 platform, which is said to offer better torsional rigidity (12.5% higher) and a lower body-in-white weight of 5.6% at just 56 kg. Key to these improvements is the use of steel and aluminium in the construction process, along with a greater percentage of Advanced High-Strength Steel and hot-stamped steel components.

As for the look of the new Sorento, it is undoubtedly a bolder design compared to its predecessor. A lot more angular in appearance, highlights include a “tiger nose” grille at the front that flow neatly into slim LED headlamps with L-shaped daytime running lights. Down the flanks, cues such as the fender gills and “shark” fin that rises from the window line add to the visual drama, along with vertical taillights and sculpted tailgate around back. If that isn’t enough, the lower apron of the rear bumper sports a black insert with a contrasting surround.

The interior is equally a big of a departure from the third-generation model, with vertical air vents that appear to be mimic the exterior taillights. Prominently displayed on the dashboard is a 10.25-inch touchscreen display on higher-end trims, with lesser ones receiving a smaller eight-inch unit instead.

The display works with the car’s infotainment system, which can be specified with UVO Link telematics for various connected services, along with a 12-speaker Bose premium sound system. A first for a Kia SUV is an available 12.3-inch digital instrument cluster that taps into the car’s Blind View Monitor so you get a live video view of adjacent lanes when you activate the turn signal.

Other features mentioned include automatic climate control with rear vents, up to eight USB charging ports, a wireless charging pad, Rear Occupant Alert, plus wheel sizes ranging from 17 to 20 inches. Kia is also offering two seating layouts, with the first being the conventional 2-3-2 with a second-row bench, or a 2-2-2 option that gets two captain’s chairs instead. Also available as an option is the X-Line package, which serves to imbue some ruggedness into the Sorento. With it, owners get an additional inch (25 mm) of ride height to 8.3 inches (211 mm), along with exclusive exterior details and a bridge-type roof rack. It also includes standard torque-on-demand all-wheel drive with a centre-locking differential and downhill descent control.

On the mention of mechanicals, the Sorento for the US market comes with four powertrain options, including two electrified options. At the base of the range is a 2.5 litre GDI four-cylinder that makes 191 hp and 247 Nm of torque, which comes with an eight-speed automatic transmission, with a choice of front- or all-wheel drive – the latter includes torque-vectoring via a centre-locking differential.

Moving up, there’s the turbocharged version of the 2.5 litre GDI that makes 281 hp and 422 Nm. This mill gets a fancier eight-speed wet dual-clutch transmission instead, also with the option of FWD and AWD. The added grunt allows for a maximum towing capability of 1,588 kg (3,500 pounds).

On the electrified side of things, the Sorento can be ordered with a hybrid powertrain that consists of a 1.6 litre turbocharged GDI engine and a 59 hp (44 kW) electric motor integrated into six-speed automatic gearbox. The front-wheel drive hybrid variant powers the electric motor via a five-kWh battery, with the whole system delivering 227 hp. The final powertrain on the list is a plug-in hybrid, which also uses the turbo 1.6 litre GDI and six-speed auto, but with a more powerful 90 hp (66.9 kW) electric motor. Kia claims up to 48 km (30 miles) of all-electric range from an eight-kWh battery, and unlike the aforementioned hybrid variant, this one is all-wheel drive with 261 hp.