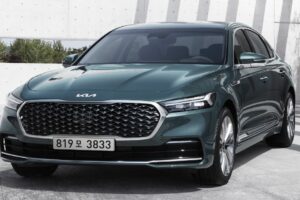 The Hyundai Motor Group has released this pair of initial images for the updated Kia K9 flagship sedan, otherwise known as the K900 outside its home market of Korea. Three years on from the debut of the current-generation model, the updated K9 sedan brings the latest iteration of the carmakers’ design language, including the latest logo that was revealed at the beginning of this year.

At its front end, the dual-tier ‘Duplex’ LED headlamp arrangement has made way for a slimmer, more angular pair of headlamps somewhat more alike the setup used on the K8, though here the K9 continues to wear a more traditional application of brightwork on its grille along the lower edge of its front bumper. Rolling stock for the new K9 is a set of 19-inch multi-spoke wheels.

These appear to be complemented by chrome trim on its door handles, window frames, front fenders and lower door trims, as well as on its rear bumper and exhaust outlet surrounds. This has also been applied to the central section bridging the tail lamps, which themselves echo the horizontal design cue used within the headlamps. This also means the rear license plate mount has been relocated to the rear bumper. Mounted on the bootlid is what appears to be a ‘4X’ badge, which suggests the availability of all-wheel-drive. The Korean carmaker has yet to release technical details for its revised flagship sedan, though for reference, the outgoing iteration of the K9/K900 was offered with three petrol engines.

Meanwhile, the recently unveiled K8 fastback employs relatively smaller engines, namely a 198 PS/248 Nm 2.5 litre inline-four petrol, a 300 PS/359 Nm 3.5 litre V6 with AWD, and an LPG version with 240 PS and 314 Nm; both engines are paired with an eight-speed automatic. An entry-level 1.6 litre T-GDI turbocharged four-cylinder engine is also on the cards, and this will get a seven-speed dual-clutch automatic.

As with the outgoing K9/K900, the updated K9 flagship sedan is likely to be manufactured in Korea for selected markets, most likely its domestic market as well as North America. More details on Kia’s flagship sedan will follow.