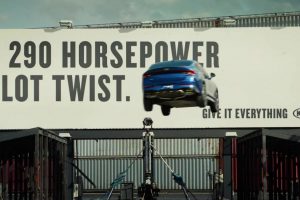 Following the debut of the 2021 Kia K5 in the United States back in July, the Korean carmaker recently took to the 72nd Emmy Awards to showcase its new D-segment sedan. How? By having the K5 land a 360-degree flat spin jump between two ramps in a stunt ad.

“Partnering with the 72nd Emmy Awards puts the all-new K5 front and centre during one of the most watched live television events of the year,” said Russell Wager, director, marketing operations, Kia Motors America. “The K5 launch is like nothing the midsize sedan category has ever seen and this latest initiative highlights the ‘it factor’ that sets the K5 apart from everything else,” he added.

As you can see in the video clip, it certainly is a very dramatic stunt, with the driver having to properly time the moment he initiates the manoeuvre to get the car into a flat spin while jumping across the two ramps. Clip that!

The car used in the stunt is the K5 GT, which is the most powerful version of the sedan, packing a 2.5 litre T-GDi that outputs 290 hp and 422 Nm of torque. This is paired with an eight-speed wet dual-clutch transmission, allowing for a zero to 96 km/h (0-60 mph) time of 5.8 seconds.

In the US, the K5 is also offered with a less powerful Smartstream 1.6 litre turbocharged four-cylinder that makes 180 hp and 264 Nm. The latest design of the sedan is certainly a striking one, with revised dimensions and an upgraded list of available equipment.