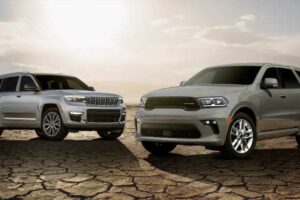 Sometimes a months-long delay really pays off: A midlevel Durango GT we had been trying to reacquaint ourselves with since winter finally landed in our driveway the same week as our first drive opportunity in the new three-row 2021 Jeep Grand Cherokee L. How could we possibly resist the opportunity to see how the long-serving but still competitive Dodge Durango stacks up with its fresh-faced, also-three-row Jeep Grand Cherokee L cousin?

How the Grand Cherokee L Measures Up to the Durango

The Jeep’s spanking-new architecture is bigger, first off. So the Grand Cherokee L has a 1.9-inch-longer wheelbase, is 4.1 inches longer overall, and is 2.1 inches wider, though its height is lower by 0.6 inch. But despite that somewhat larger exterior, interior volume is nearly identical between the two, with the Jeep affording the front and middle rows a bit more space, at an apparent 3.2-cubic-foot expense to the third row. But that’s just because Jeep measures its legroom dimensions with the middle-row seats in their full-aft position along the 7 inches of travel. Leave the seat where it normally stops after someone climbs in back, mid-travel, and you have Durango level space.

Cargo room is also very similar. The tape measure is of no help in deciding between these two. The Jeep gains a major third-row accessibility advantage, with second-row seats that tilt and slide, preserving the backrest angle to allow a forward-facing child seat to remain installed (sans the kiddo). The Durango seat backs fold in half and dump forward in a two-step process. Neither design is as easy for a small child to operate as are the all-new Nissan Pathfinder’s electric-release chairs.

Durango vs. Grand Cherokee L Performance on the Road

This category is no help, either, as both vehicles share 3.6-liter Pentastar V-6 and 5.7-liter Hemi V-8 engines, eight-speed automatic transmissions, and most gearing. (V-8 Durangos get a taller 3.08:1 axle ratio, while all the Jeeps share the shorter 3.45:1 ratio with the Durango V-6.) The brand-new Jeep employs more high-strength steel and some aluminum castings that help the bigger L model weigh the same as the smaller, current-gen two-row Grand Cherokee, so it undercuts the older Durango by 100 to 150 pounds when comparing base models. (As an aside, the Durango and the outgoing two-row Grand Cherokee shared a platform, with the Dodge merely stretching those bits to accommodate a third row seat.) But the Jeep’s richer options and feature sets will probably equalize the weight as you climb the trim ladder, so don’t expect much difference in acceleration times.

A skilled trail runner could probably get lower-spec models of both stuck about the same distance into the bush, as there’s little difference in ground clearance or the approach, breakover, and departure angles, and the two lowest Grand Cherokee L trim levels don’t get low-range 4WD or Selec-Terrain as standard. Order a 5.7-liter, all-wheel-drive Durango, and you get a transfer case similar to Jeep’s Quadra-Trac II unit. (Both feature a 2.72:1 low range, variable front/rear torque split, and a neutral position to allow flat-towing behind an RV.) But no Durango can match the Grand Cherokee L Overland’s Quadra-Lift air suspension and available electronic limited-slip rear diff and skidplates.

How About Towing and Hauling?

At the low end, each is rated to tow 6,200 pounds—considerably more than most front-drive, car-based crossovers can manage. At the top end, the Jeep maxes out at 7,200 pounds, but a 5.7-liter Durango with the Tow n’ Go package is rated for 8,700 pounds, which is tiptoeing into full-size pickup territory. On the payload side, both vehicles start with the same gross vehicle weight rating: 6,500 pounds, but V-8 Durangos are rated for 7,100 pounds, while their Jeep brethren are restricted to 6,900. So the Jeep payloads range from 1,190 to 1,400 pounds depending on equipment, while the Durango ranges from 1,290 to 1,460 pounds—not counting the SRT models that Jeep doesn’t yet offer. The Durango ekes out a narrow win here.

When Jeep product planners tell you their new three-row SUV won’t cannibalize sales of the identically sized Dodge ute, it’s hard not to roll your eyes, but our back-to-back drive lends some credence to the notion. The Dodge’s design inside and out telegraphs a sporty road-burner mien. You get the sense that the AWD system is mostly offered to prevent wheelspin in daily stoplight grands prix. Conversely, everything about the Jeep says, “Pavement is merely to be tolerated en route to the wilderness,” from the many switches and screens devoted to off-roading to the contour-map background used on several infotainment menus.

This Dodge’s bones share DNA with the third-gen (2011) Mercedes M-Class. That’s getting to be pretty old in car years, and the difference in age between the Durango and the Jeep can be felt in a matter of blocks. We sampled a 2021 Grand Cherokee L Laredo—the base model, which actually costs less (both base and as tested) than the Durango GT we drove. The Jeep’s ride felt considerably smoother—some of which might be attributable to a difference in wheel and tire sizes (18s on the Jeep, 20s on the Dodge)—but the impacts felt less jarring and reverberated through the chassis much less than in the Durango. The ride is also incredibly quiet, with very little tire or wind noise in evidence. The Grand Cherokee clearly feels a generation newer.

Acceleration feels identical except that less engine noise enters the Jeep; this can give the impression it’s going slower, but it’s not. The Durango felt better optimized for cornering on its 20-inch 50-series sidewall Bridgestone Ecopias (which Tire Rack customers rate highly for dry performance), but this advantage may disappear on the base model’s 18-inch Michelin LTX all-season footwear. The Jeep gets fractionally bigger brake rotors and calipers. This should boost performance a little, but it improves pedal feel a lot. There’s a bit less lost motion in the pedal and great linearity, which translates to better control over deceleration in daily use.

Dodge has kept the infotainment and driver assist features fairly current on the Durango, which essentially shares its high-resolution (1,920×1,200 pixel) 10.1-inch Uconnect 5 screen with the Jeep, so the vehicles are closely matched in terms of user interface.

How Does Pricing Compare?

Many dealers will be offering both, so although there’s abundant overlap in the broad price ranges of these models, there’s a fairly significant gap between them when comparing like powertrains and trim levels (Dodge SXT, GT, R/T, and Citadel versus Jeep’s Laredo, Limited, Overland, and Summit; we exclude Dodge’s SRT variants for now, as there are not yet equivalent Grand Cherokee L models). The gap ranges from $5,430 to $10,585, which largely reflects standard equipment being piled into the Jeep variants.

The Jeep is clearly best for outdoorsy types who fully intend to take their three-row SUV off-roading, and it stands well apart from every other midsize three-row SUV entry in that regard. Folks who prefer the look, swagger, and somewhat sportier personality of the Durango can get virtually the same package, at least physically speaking, for a substantial discount right now, and those with heavy trailers to tow will also find this the most compelling vehicle in the class. Those hoping the Durango might simply migrate to the Jeep platform may have quite a wait, though, as it was just refreshed for 2021, and Dodge could ultimately decide to discontinue it or migrate it to the Wagoneer platform to better compete with the Chevy Tahoe and Ford Expedition.