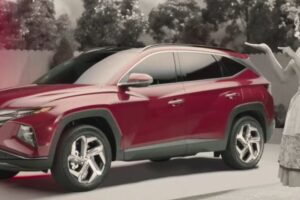 The 2021 Hyundai Tucson features in the latest Marvel Studio TV commercial spot for the trio of TV shows released for television, featuring Tom Hiddleston as the God of Mischief in Loki, Anthony Mackie as Sam Wilson a.k.a. The Falcon in The Falcon and The Winter Soldier, and Elizabeth Olsen as Wanda Maximoff in Wandavision.

Titled ‘Question Everything’, the TV commercial spot features the leading character of each series in their own scene with the SUV, each calling into question the conventional wisdom of phrases often heard in common speech; likely alluding to the Tucson’s design that is much more distinct from previous designs with its ‘parametric dynamics’ look with jewel-like surfaces.

The fourth-generation SUV made its debut in September 2020, goin on sale in its native Korea that same month. At debut, the Tucson was presented with two engines – a 2.5 litre Smartstream direct-injection petrol engine producing 190 PS and 260 Nm of torque, and paired to an eight-speed automatic transmission.

The second is a 1.6 litre turbo four-cylinder in hybrid and PHEV configurations, producing 180 PS and 264 Nm of torque from internal combustion alone or 230 PS and 350 Nm of torque in total system output. The Tucson can be specified as a front-wheel-drive, or in HTRAC all-wheel-drive form.

The 2022 model-year introduction for the US market saw the introduction of a long-wheelbase version, which at 4,630 mm long and 1,864 mm wide, is 155 mm longer and 15 mm wider the standard length vehicle. At this point, the PHEV variant was revealed to pack a 13.8 kWh battery that can be recharged in under two hours from its 7.2 kW onboard charger, yielding a pure EV range of 45 km.

A more performance-focused version, the Tucson N-Line was introduced at the beginning of this year, featuring even more assertive styling for a sportier look. In range-topping PHEV form, the Tucson N-Line has been rated at 265 PS, in addition to the 230 PS Tucson N Line Hybrid and the 48-volt mild-hybrid with 150 PS or 180 PS, as well as a base, internal combustion variant with 150 PS.