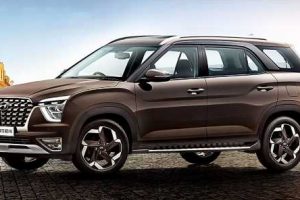 Hyundai has finally released the first images of the new Alcazar, which is a three-row SUV developed for India. The new model was previously teased back in March and will reportedly go on sale in the country in early May.

The 2,760 mm wheelbase is 150 mm more than the Creta, and is necessary to make room for a third row of seats. It also results in an increased rear overhang, which is most evident in profile. Viewed from the side, we can also see the Alcazar’s character line mimics those on the Creta, although it extends further and ends at redesigned taillights.

The C-pillars are also rather prominent from this angle, accompanied by additional rear quarter windows and D-pillars. Autocar India notes that the Creta’s front fenders, bonnet and front doors are carried over to the Alcazar.

Other notable items include side steps and a larger set of 18-inch alloy wheels, the latter an inch larger than the Creta’s. As for the front, it’s very similar to the Creta, albeit with some differences. These include a studded grille in chrome, a tweaked front bumper and additional positioning lights that blend into the grille.

Of course, the main selling point here is the interior, which can be specified with a six-seat layout that includes captain’s chairs in the second row, or a seven-seat arrangement with a second-row bench. The former comes with a floor-mounted centre armrest with cupholders and storage spaces.

With either option, the second row has a one-touch tumble mechanism for access to the third row as well as a sliding function. With all three rows in their default position, there’s 180 litres of boot space available, although this can be increased by folding down the reclining third row.

Hyundai did not provide an image of the dashboard, but it shouldn’t stray too far from what you get in the Creta. The list of available equipment includes a 10.25-inch touchscreen infotainment system with Android Auto and Apple CarPlay support, connected services, a 360-degree camera, a panoramic sunroof, Isofix child seat anchors, a wireless charger and automatic air-conditioning, among others.

There’s also a diesel option, which is the Creta’s 1.5 litre U2 CRDi turbodiesel that produces 115 PS and 250 Nm, although it has been tuned differently. Both engines meet India’s BS6 emission standards and can be ordered with a six-speed manual or automatic transmission.