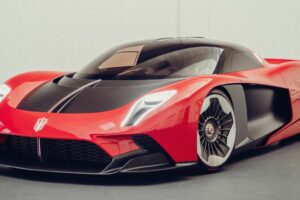 The production version of the Hongqi S9 hypercar is ready to be unveiled, and it will done so at the Milan Design Week that kicks off in early September, Automotive News reports.

The Hongqi S9, designed by the famous Walter De Silva, is the first of several ultra-luxury S series sports cars to come. Production is said to be limited to 99 units, and the hypercar will reportedly pack a cutting-edge 4.0 litre twin-turbo plug-in hybrid V8 powertrain that develops 1,400 PS. With the assistance of three electric motors, Hongqi says the S9 will do the century dash in 1.9 seconds.

Silk EV and FAW (the two firms that teamed up to create the S9) are clearly pulling out all the stops to position the S9 against established automakers like Ferrari and Lamborghini. Firstly, the automaker is in the midst of setting up shop in the elite Emilia-Romagna region, known as Italy’s ‘Motor Valley’. It has also hired former Ferrari CEO Amadeo Felisa as a member of the senior advisory board, and as the special advisor to the executive chairman. Roberto Fedeli, former executive for Ferrari, Alfa Romeo and BMW has also been named as Hongqi’s new chief technology officer. These high profile hires are just two of many other handpicked for their experience with Italian luxury and performance marques.

The first batch of cars are expected to be delivered in 2022, with prices reportedly starting from around 10 million yuan (RM6.5 million). Production will take place either in Italy or the Jilin Province in China.