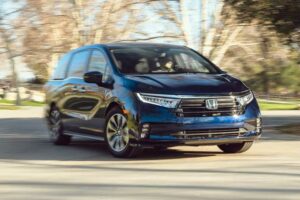 As mentioned in update 3, our photo department manager and “king of the highway” Brian spent many weeks road-tripping our 2021 Honda Odyssey EX-L. In the thousands of miles he traveled, he managed to cruise past the first recommended service interval, which pops up as an alert in the instrument cluster as the odometer clicks over at 7,500 miles.

So as a favor, he took it in for what should have been a routine appointment. Instead, I get the following notes back via our interoffice messaging app (Slack, if you’re curious).

“I had the long-term Honda Odyssey serviced today at Hollywood Honda (fantastic lil’ Honda dealer). They went to rotate the tires, and one of the front right (passenger side) lug nuts is stuck, cross-threaded. They didn’t want to risk stripping it, so they marked it with blue in and left the wheel in place and rotated the driver side wheels. Whaddya wanna do?”

After verifying that no one on staff was responsible, and some brow furrowing about how else this could have happened, we decided to have it fixed and report on the costs, even though it won’t represent most consumers’ ownership experience (at least we hope not). For good measure, we searched for recalls at the official Honda owner’s site and found nothing. You can see the report for our vehicle (based on its VIN) here.

What should have been a simple, sub-$100, half-day service, including oil change and tire rotation, ended up costing over $500 and took over two weeks to complete, as the wheel stud needed to be ordered. Fully $400 of the total was the labor involved in removing the wheel and the hub on which the wheel studs are attached and the use of a hydraulic press to remove/replace the damaged stud. Here is how the costs break out:

We weren’t thrilled at the time and expense it took to get the vehicle fixed, so I can only imagine how miffed an actual owner of a 2021 Honda Odyssey would be. It took two separate trips (separated by about two weeks) to get this situation resolved. In fairness, the service itself was quick, and Hollywood Honda’s service adviser was responsive and generally transparent about costs and risks involved.