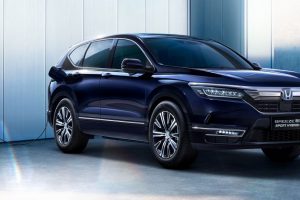 Alongside the new Honda SUV e:prototype at this year’s Auto Shanghai is the Breeze PHEV, which is the first plug-in hybrid model to be introduced by GAC Honda (aka Guangqi Honda or Guangzhou Honda) – a joint venture between the GAC Group and Honda Motor Company.

As a recap, the Breeze is based on the existing CR-V, but gets its own unique styling to set it apart. The CR-V received a plug-in hybrid version last September, so it shouldn’t be much of a surprise that the Breeze will follow suit. According to Honda, the Breeze PHEV is scheduled to go on sale in the second half of 2021.

Design-wise, the Breeze PHEV doesn’t differ too much from the regular petrol and hybrid variants that came before it. Aside from the addition of a charging port on the right of the body and blue-tinged Honda logo, it looks pretty much the same as the car introduced in October 2020.

Unfortunately, Honda didn’t provide detailed information about the new model, but did say it is based on the Sport Hybrid i-MMD system, but with plug-in capability. As such, it’ll likely get the same Sport Hybrid e+ setup used by the CR-V PHEV.

This consists of an electric motor rated at 184 PS and 315 Nm of torque, along with a 2.0 litre Atkinson-cycle four-cylinder petrol engine with 145 PS and 175 Nm, plus an eCVT for direct engine drive at higher speeds. Thanks to a 17-kWh lithium-ion battery, the CR-V PHEV is capable of an all-electric range of 85 km and a fuel consumption of as low as 1.3 l/100 km.