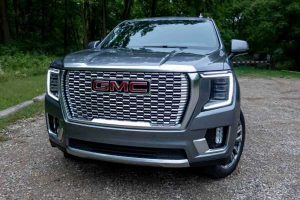 The verdict: The redesigned 2021 GMC Yukon Denali is so good, you’ll wonder why you need to spend more for the new Cadillac Escalade.

Versus the competition: It’s more spacious than anything from Land Rover, nicer in every way than the latest Lexus LX or Infiniti QX80, and it even gives the lovely Lincoln Navigator a run for its money.

The GMC Yukon occupies an unusual place in GM’s lineup of big sport utility vehicles. It’s ostensibly nicer than the Chevrolet Tahoe but not quite as nice as the luxury-branded Cadillac Escalade — and seeing as how it’s nearly identical mechanically to both of those models, sharing everything from engines to suspension bits to seats, that leaves interior and exterior styling as the Yukon’s main differentiator. The Denali trim level further complicates things — it’s GMC’s luxury sub-brand, applied across the board to nearly all products and signifying a top trim level that’s meant to appeal to very specific buyers. Who? People who want luxury but don’t want ostentation, according to GMC. It’s been extremely successful, with a considerable portion of GMC sales now coming in the form of top-spec Denali models.

So when the latest full-size GM SUVs got a full-size redo for the 2021 model year, GMC decided to make the Yukon Denali extra-special by giving it a unique interior. I recently took one for a brief spin to see if GMC’s efforts at making the Yukon Denali stand out make it worth its considerable price tag.

All Up in That Grille

It’s hard to make three SUVs based on the same body structure look different, but GMC’s designers have managed to accomplish it with a completely different front end than either the Tahoe or the Escalade. And the way they’ve done it is grille — lots of it, huge amounts of it, done up in full chrome treatment on the Denali, just as Denali customers like it. Apparently, the idea of flying under the radar with your luxurious SUV doesn’t apply to the front end, where chrome trim abounds. But the distinctive C-shaped daytime running lights also help the distinctive look of the Yukon, and overall the look is bold and imposing, especially when it appears in the rearview mirror of anyone going too slow in the fast lane on the highway. Down the side, the look isn’t much different from the Tahoe or Escalade, with only some slight variation in chrome trim and badges. Out back, the taillights are similar to the Tahoe, but receive that signature GMC C-channel look that allows for some distinctiveness and separation from its sibling SUVs.

The Denali comes with full LED lighting front and back, including foglights. A dual exhaust with dual tips spiffs up the rear bumper area. Specify the Denali Ultimate Package, which my test vehicle had, and you’ll get 22-inch bright machined-aluminum wheels and power retractable side steps. Overall, the look is more formal and less futuristic than the Tahoe, and less minimalist and angular than the Escalade. It’s a good look and fits well into the GMC pantheon of SUVs, helping to distinguish the Yukon appropriately.

Mechanically Identical to Its Kin

There aren’t many differences between the top-spec Yukon and the top-spec Tahoe in terms of mechanical bits. The engines are identical, the suspension options are the same, and it’s same brakes, same gearing, same transmissions. As such, your choices are the standard 5.3-liter V-8, optional turbo-diesel 3.0-liter inline-six or the big 6.2-liter V-8 that comes standard with the Denali trim; it makes 420 horsepower and 460 pounds-feet of torque, and it’s the one to have with any of the big GM trucks. All engines are mated to a 10-speed automatic transmission and can be had with either rear-wheel or all-wheel drive.

The all-wheel-drive system is different from the Chevy Tahoe’s in that it includes GMC’s exclusive Active Response 4WD System, (an automatic two-speed transfer case, chassis controls, an electronic limited-slip differential and the Traction Select system that combine to make for a more effortless AWD setup than is seen in the Chevy). As for the powertrain, the big 6.2-liter V-8 is impressive, with smooth, seamless acceleration when called for, accompanied by a growling burble through the dual exhausts that hints at what lies beneath the sculpted hood. It’s as happy trundling around town as cruising the interstates — which you will do at speeds you don’t expect to be traveling at thanks to the extraordinary level of quietness the SUV provides.

My test vehicle came with big 22-inch wheels, which normally means a choppy, bumpy ride in a big SUV, but this was mitigated significantly by the presence of both the air spring suspension and Magnetic Ride Control shock absorbers. Compared with the Tahoe High Country I tested, the Yukon Denali was significantly quieter, smoother and less choppy — you didn’t feel that the 22-inch wheels were too big for the truck, and not as much of the road imperfections were transmitted into the cabin. I’m a little perplexed as to why the Yukon Denali rides so much more comfortably than the Tahoe High Country given that they both have an air suspension, Magnetic Ride Control and the same size wheels, yet the difference was noticeable.

One area that the Yukon hasn’t made any gains in is fuel economy, understandable given the new SUV’s increased weight and carryover engines. The Yukon 4×4 with the 6.2-liter engine is EPA-estimated to get just 14/19/16 mpg city/highway/combined, not as good as the 17/22/19 mpg that the twin-turbo V-6-powered Ford Expedition 4×4 is rated to get, but still better than the 13/19/15 mpg seen in the 5.7-liter V-8-powered Infiniti QX80 AWD. My brief spin in the Yukon was not sufficiently long to get an accurate reading.

Where the Yukon separates itself from the Tahoe and Escalade is inside, where two completely different environments are available depending on the trim level you get. The Yukon features the same version of the instrument panel as the Tahoe, albeit with some slightly different trim and color options, but it’s a well-designed, high-quality piece that looks far more appropriate to the price of the vehicle than what GM has stuffed into the pickup trucks that share the same platform. Opt for the Denali, however, and you get a unique dashboard. It’s even nicer than the base dashboards, featuring a 10-inch multimedia screen that looks much more integrated into the dash than the tablet-style mount found in the other trim levels and on the Tahoe.

The quality of the cabin is a considerable step up from prior GMC Denali interiors of any type on any model, which felt barely any different than lesser trims, just presented in an alternate color. In the new Denali, the unique dashboard with its stitched leather trim, real metal accents, real wood veneers, and high-quality buttons and switches give it the premium feel that its price commands. The trick sliding center console storage box is also present, activated by a switch hidden amongst the rather confusing moonroof controls (they’re tricky to operate on the fly, as you can’t easily determine which button does what without direct examination). The console seems a good place to stash illicit items, at least until the local constabulary get wind of how the system works.

The vehicle is very quiet at speed thanks to thicker laminated glass up front than is present in the Tahoe, one of the few areas of differentiation that customers don’t actually see but that become evident when sampling the two.

The rest of the interior shows the same versatility and comfort present in the Tahoe, with seats that are easy to fold or slide, and far more room in each of the second- and third-row positions than prior Yukons. Credit the new independent rear suspension and expanded dimensions inside and out that have allowed GMC engineers to reconfigure the Yukon’s interior packaging to allow for far greater comfort than was available before. Full-size humans can fit in the third row without any problem, and getting in and out is a breeze thanks to the tilt-and-fold mechanism on the second-row captain’s chairs in the Denali. All of those seats are covered in perforated leather, and the second row is heated as well.

The interior isn’t perfect. We’re still not decided on if we like the push-button transmission, but it seems better than most to use, and we like that it’s mounted up high on the dash for easy viewing, not low down where it’s out of sight. The rearview mirror is smallish, as well, considering the size of the rear window it has to cover. But these are small quibbles in what is otherwise a dynamite execution of an improved luxury SUV interior. It easily surpasses the top Platinum trim for the Ford Expedition and gives a good showing against the more posh Lincoln Navigator, and its modern amenities shame the aged Infiniti QX80 and related Nissan Armada. The interior is so good, you’ll wonder why you need to spend even more money on the upcoming Cadillac Escalade — until you see what Cadillac has in store regarding dashboard technology that will make even the Yukon Denali look like yesterday’s news, anyway.

The latest big SUVs are not the bargains they once were, as top technology, lighter-weight materials, luxury trimmings, reduced demand from their heyday of the 1990s and a refocusing on specific customers have all conspired to drive prices well beyond reason. The base price for a new 2021 GMC Yukon Denali is $72,695 (prices include destination). My test vehicle had the Denali Ultimate Package that includes a rear media system, power assist steps, dual-pane panoramic moonroof, 22-inch wheels, adaptive cruise control, air suspension, rear camera mirror with camera washer, trailering package and more for an eye-popping $11,180. A few other odds and ends brought the as-tested price up to $83,720, which is definitely luxury SUV territory.

… Or at least it would be, if it wasn’t also possible to option up a Chevy Tahoe or Ford Expedition or even an ancient Toyota Sequoia to north of 70 grand. But the Yukon’s mission to provide a luxury brand option to people who don’t want the ostentation and flash of a Cadillac yet feel that they’re above the mass-market image of a Chevrolet seems to be a solid one. Ford has only the two options, luxury (Lincoln Navigator) and nonluxury (Ford Expedition); so does Nissan (Armada and Infiniti QX80). Toyota doesn’t sell a Lexus-branded version of the Sequoia; if you want a big luxury Lexus SUV, your option is the LX 570, which is a horrifically expensive, rebadged Toyota Land Cruiser that starts at some $93,000 for a three-row version.

The progress made here is that the Yukon Denali finally feels like a proper luxury vehicle, with a smoothness, quietness and sophistication that’s been lacking in prior versions. If the price doesn’t scare you, the SUV itself should certainly satisfy you.