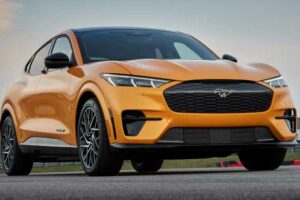 Ford says the Mach-E GT Performance Edition, equipped with Pirelli summer tires and magnetic dampers, can make a run from 0 to 60 mph in just 3.5 seconds. The Performance Edition generates 480 hp and 634 lb-ft of torque and has a starting price of $66,000. With the same horsepower output but slightly less torque, the Mach-E GT, which starts at $61,000, will reach 60 mph from a standstill in 3.8 seconds.

Two fierce competitors of the Blue Oval’s Mach-E electric SUV include the Kia EV6 and Tesla Model Y. According to estimates by Kia, the EV6, which will be available in several configurations, will travel up to 300 miles on a full charge in its most range-focused form. The Model Y Performance gets an EPA-estimated 303 miles of range, whereas the Long Range model comes rated at 326 miles.

The pricing for both Mach-E models does not include available state incentives or the $7,500 federal tax credit. Mach-E GT deliveries will begin in the fall, and customers can make reservations with a $1,000 deposit.