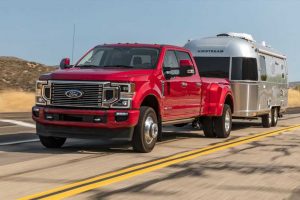 Going into to this year’s Truck of the Year competition, the refreshed Ford Super Duty was the odds-on favorite. In 2017, the then-new Super Duty took home the Golden Calipers; this year’s edition just went through a particularly thorough refresh.

View Other 2021 Truck Of The Year Contenders And Finalists Here

Even though the honey-do list was short, much has been updated. The big news is the most torque in the segment—a muscular 1,050 lb-ft from the 450-hp 6.7-liter turbo diesel V-8. Even bigger, a pushrod 7.3-liter gasoline V-8 replaces the ancient 6.8-liter Modular V-10. Then there’s the new 10-speed automatic transmission. Also cool: a new harder-core off-road package called Tremor, which is available on several trim levels. Let’s see how the new Super Duties fared against our six key criteria.

“Advancement in design is not the Super Duty’s strongest suit,” features editor Christian Seabaugh said. Between you, me, and the wall, the big Fords look just like the old ones. Same goes for the interiors. Sure, a grille got tweaked here, and there’s a new color trim there, but you’d be hard pressed to visually tell the 2017s apart from the 2021s. This is fine for the exterior, as this Super Duty generation is handsome. The interior is a problem, however; the Ram Heavy Duties (last year’s TOTY winner) have a nicer interior with a significantly larger and more functional touchscreen. The Ford remains the same.

The two Fords—we tested both an F-250 Tremor and a F-350 Limited dually—did impress us in terms of engineering excellence—especially that big boy F-350. “The engine is smooth and refined, the transmission shifts gears at the right time, and the steering gives you a great feel of what’s happening at the wheels,” MotorTrend en Español‘s Miguel Cortina said. “It’s hard to believe that this truck has over 1,000 lb-ft of torque given how refined and quiet it is.”

Then there’s towing. “This truck is only vaguely aware that 5,200 pounds of trailer has been attached,” features editor Scott Evans said. “The weight is inconsequential to this engine.”

The same is true for the Tremor when saddled with a 2.5-ton trailer. “Trailer never wagged the truck in the slightest,” Evans said. “The 7.3-liter V-8’s got a ton of power. I wouldn’t worry at all pulling a heavier trailer. The transmission is at the top of its game, which made towing a breeze.”

If only the Tremor was as loved off-road. “It’s like exploring the world with an anvil,” associate road test editor Erick Ayapana said. Although it’s crazy-capable, the Tremor’s massive weight (7,240 pounds) gave it a brutal ride off-pavement, even after airing down the tires. Said Cortina: “Its ride is stiff, bouncy, and jittery. Even on the parts where the trail seems smooth, there’s a lot of vibration in the cabin.” Seabaugh added that it “rebounds poorly over bumps and lacks the body control of a Power Wagon.”

Why? Because unlike the competition, the Tremor actually offers impressive payload capacity, up to a claimed 4,053 pounds. However, it’s billed as an off-roader. This means that the F-250 Tremor stumbles a bit against one of our key criteria, performance of intended function.

We also struggled saying definitively that the refreshed Fords are better than the Ram Heavy Duty trucks that won it all last year, save for towing, where we all agree that the F-350 Limited dually can out-tow an airport tug. The big boy was also superlative as a cruiser on our long loop. “This dually drives so well that you forget you’re driving a dually,” Cortina said.

Many of us felt the same way about the Ram 3500 last year. A future comparison test is going to have to settle this one. Until that time, know that Ford did a great job polishing its largest diamond.