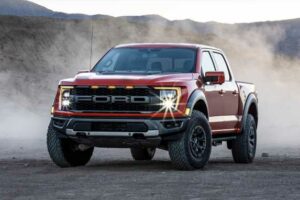 Interestingly, the 2021 Ford Raptor isn’t the truck that’s been breaking the internet for Dearborn lately. That’s been the job of the new F-150 Lightning and the new Maverick compact pickup truck. It’s still a beloved member of Ford’s truck lineup, and it (along with the rest of the F-150 range) received some major updates for 2021. More aggressive bodywork, 37-inch tires, and a new five-link rear end were among the improvements, but it turns out that extra power won’t be.

The 2021 Ford Raptor will make 450 horsepower at 5,850 rpm and 510 lb-ft of torque at 3,000 rpm from a twin-turbocharged 3.5-liter V-6. Those figures are identical to the previous generation Raptor that ditched the old 6.2-liter V-8 in favor of the EcoBoost V-6. That might come as a slight disappointment to hardcore Raptor fans, especially after the Raptor was overshadowed by the new Ram 1500 TRX’s 702-hp 6.2-liter supercharged V-8.

But worry not. Ford’s got something planned for the TRX, too: the upcoming Raptor R, rumored to make somewhere in the neighborhood of 700 horsepower. That’s the truck that will do battle with our current Truck of the Year. The 5.2-liter V-8 that’s expected to sit under the hood of the Raptor R will likely be based on the Predator engine that’s in the Shelby GT500, which cranks out 760 horsepower and 625 lb-ft of torque—albeit detuned for Raptor duty.

If you don’t want to wait for the Raptor R, or can’t be bothered with the horsepower wars that are going on between Ford and Ram at the moment, the order books for the regular Raptor, which starts at $65,840, will open up tomorrow.