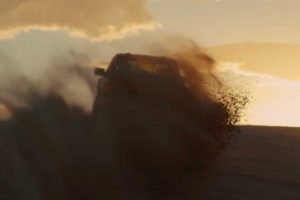 Watch the Raptor play in the sand.

The 2021 Ford F-150 Raptor is hours away from debuting at 11:00 AM ET on February 3, and the Blue Oval has one last teaser for its much-anticipated performance pickup. As before, it uses the intro to Metallica’s Enter Sandman that is both a great accompaniment for the aggressive model and a fitting tune because the pickup excels at driving through the sand.

The brief video shows the F-150 Raptor kicking up dirt while the sun sets in the background. Because of the angle, only the truck’s silhouette is easily visible. At the end, there’s a shot of the pickup driving through the desert, but the vehicle is very tiny in the frame.

A recent leak suggests the 2021 Raptor uses Ford’s high-output 3.5-liter twin-turbo V6. The power output isn’t available but should be at least the 450 horsepower (336 kilowatts) and 510 pound-feet (691 newton-meters) from the previous generation. It’s possible the 10-speed automatic and sophisticated drivetrain that supports all- and four-wheel drive might return on the new truck, too.

The same leak indicates that buyers can get the new Raptor in eight colors: Code Orange, Rapid Red, Velocity Blue, Antimatter Blue, Iconic Silver, Lead Foot, Agate Black, and Oxford White. Folks who want some more light in the cabin can order a twin-panel moonroof as a $1,495 option. Forged aluminum wheels are $1,895.

There are rumors of Ford introducing a more powerful version of the Raptor later. The engine note in spy video suggests that this variant might have a V8 engine. Don’t expect to see this model for at least a year after the standard truck’s debut, if it happens at all.