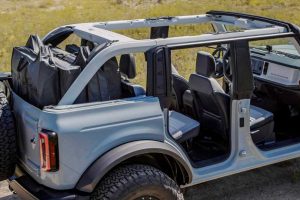 It’s not much different from tops on the current Jeep Wrangler.

Ford is absolutely targeting the Jeep Wrangler with its reborn Bronco. If its two-door and four-door body styles weren’t enough, the removable body panels that include the doors and top are absolutely in the Wrangler’s wheelhouse. Ford has said its top functionality is easier to manage than the Wrangler, but is it really?

Two new videos from Bronco Nation show the removal process for both the hard top and soft top, and right off the bat, we see it’s actually quite similar to the current-generation Wrangler. We’ll start with a look at the hard top (video at top of article) which is the only top you can have on the two-door model.

As with the Wrangler, Ford offers two removable panels in the front that detach without any need for tools. Rotate and pull a few latches and panels over the driver and front passenger seat come out without any drama – even if the Bronco has the optional roof rack installed. The panels easily stow in the back of the off-roader, giving an open-air feeling for the two front seats in literally less than a minute of work.

Taking off the rest of the hard top requires unplugging a wiring harness and washer fluid tube, just as you do on the current JL Wrangler. It’s secured to the body by four easy access bolts on each side, but if you have the roof rack, it needs to come off first and that requires a special tool to unscrew weird triangle-shaped fasteners. The video doesn’t say if the tool comes with the Bronco, or if it’s something you’ll need to buy separately from Ford.

The soft top (featured below) is standard on the four-door model and while there are a few more steps, the overall process is easier. For starters, it comes with a simple fold-back feature you don’t get on the Wrangler, allowing the roof over the two front seats to flip back like a large sunroof in just a few seconds. For off-road use, straps are used to secure the folded front section so it doesn’t bounce all over the place. It’s definitely an advantage over the Wrangler which only offers its soft top fully on or off – no in-between.

Completely folding the Bronco’s soft top requires removing the side and rear panels, which are held in place with a series of buckles. Once they are undone, the panels are stored in the Bronco and the top simply slides back to its fully down position. If you want the soft top removed completely, that requires removing rear panels from the interior and unbolting three fasteners per side.

All in all, removing tops between these competitors is very similar. Jeep simplified its process for the current JL Wrangler in 2018, but Ford’s cool quick-flip for soft tops is definitely an advantage and neither requires special tools to make it happen. Hard top removal does require tools, but that’s the price you pay for a bit more solidity in your nimble off-roader.