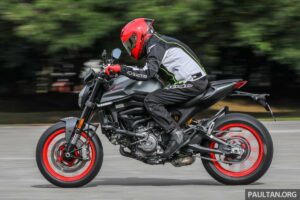 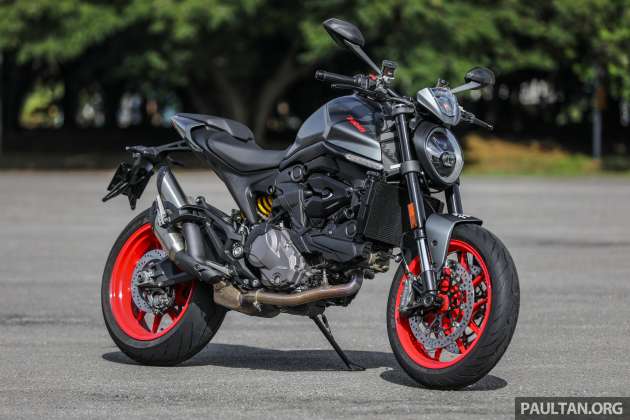 At the launch of the 2022 Ducati Monster, yours for RM69,900 in Malaysia, there was a… grave disturbance amongst Ducatisti. That iconic street fighter look that entered the market in 1993 with the Monster M900 was an instant sales success.

It can be argued the Monster, through the decades, was the bike that saved Ducati from financial oblivion, allowing them to continue producing and developing first the Desmoquattro then the Testastretta V-twins fitted to the Ducati superbikes. But what made the Monster appealing to the public?

And we need to emphasise this, public. The design of the original Monster, penned by Miguel Angel Galluzzi from and idea by then Ducati Technical director Massimo Bordi, defined the nature of the naked street bike for two generations of riders. 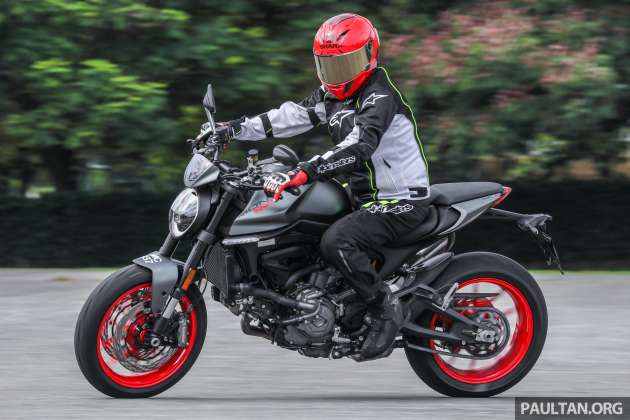 The simple lines of the Monster, engine on display, trellis frame brought to the fore, hulking fuel tank perched on top of everything made it the very essence of a motorcycle. Sales of the Monster reflected this, at one point accounting for over half the motorcycles Ducati made and sold and from some accounts, 300,000 were purchased by riders getting their entry into the world of Italian motorcycles.

Now, here’s that word, “entry”, which in the context of this review, does not mean cheap, or low quality but does mean something else altogether. So, when the new Monster was handed over to us, we wanted to know exactly what was new, what was changed and the big question, is it still a Monster? 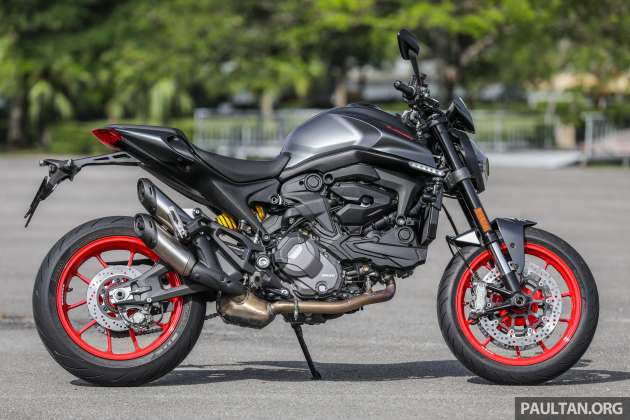 That the previous generation Monster was a game changer cannot be denied. That aggressive stance struck a chord in hearts and minds of riders, making Ducati an aspirational brand for many and it is still so today.

There is an issue though, with “legacy” motorcycle designs. New blood has to be brought into the fold, for the gods of speed demand it thus.

Brands ignore this to their peril and demise for a failure to innovate spells certain doom. After the best part of three decades, the original Monster design had perhaps reached a certain zenith and Ducati decided something new was in order.

Well, if you’re talking about a new design, the new Monster certainly delivers. The trellis frame is gone, replaced by a cast alloy unit based on the monocoque used in the Panigale V4 with the engine used as a stressed member supporting the rear sub-frame.

The styling is… polarising. When the author first saw the press photos of the 2022 Monster, a message was sent to a friend working in Ducati Italy, someone very involved in the new motorcycle design process, asking, “why did you make it so Japanese?”

A reply to that question was received via Ducati Malaysia, a very clipped, “you are not the rider for which this motorcycle is intended.” Well, then, that answers that, but what is the new Monster all about? 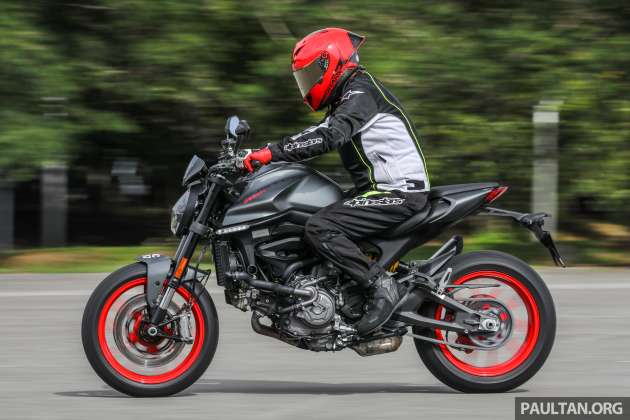 First off, aside from the new frame and styling, the familiar V-twin is still there, a Testastretta 11 displacing 937 cc, the same mill used in the Multistrada V2, SuperSport 950, Hypermotard 950 and the newly launched Streetfighter V2. All good there, then, a proven engine with known foibles in a new chassis and styling tends to minimise teething problems.

From the specifications sheet, then, there is little to split between the Monster and its main rivals. There will be those of you who will raise a hue and cry about differences between hp numbers and the such to which I suggest you bean counters get a life. 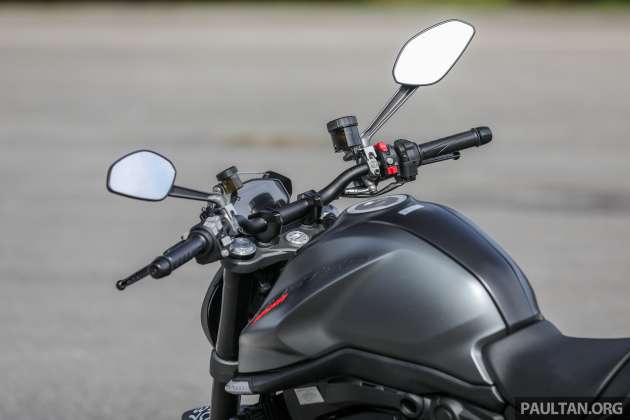 The big indicator of a motorcycle is how it is to ride, and how does it behave in the hands of riders of varying skill levels, which is basically what this review is for. If anyone wants to say this review is less than honest and is “commercial” the author strongly suggests you have a chat with staff from Ducati Malaysia and ask them how they feel before I return any review motorcycle, and precisely what they do with my feedback.

Moving right along, the Monster moves, and in an… approachable fashion. The thing about Ducati’s is that they were always an enthusiasts vehicle, demanding a rider who knew exactly what he or she was doing in order to get the best out of the bike.

In the new Monster, things have changed. A ham-fisted twist of the throttle while heeled over in a corner is not going to catapult you into the sky and subsequent visit to the hospital Accident and Emergency Department. 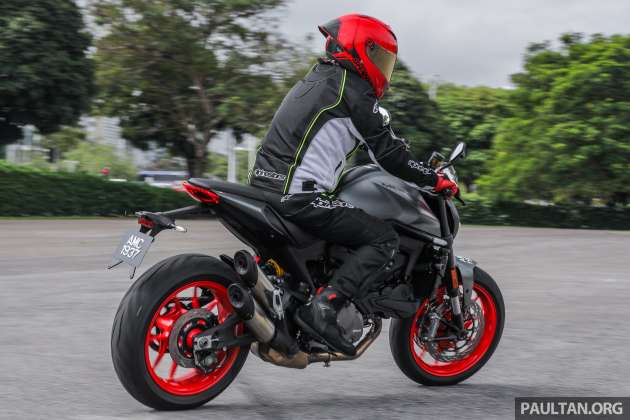 Steering on the Monster has been revised from the previous generation Monster 821, a little steeper, a little easier to change direction and a whole lot lighter. When we saw approachable, any rider is going to, while not exactly feel comfortable, at least be able to acquit themselves well on the Monster, whether at newbie speeds or seasoned rider heeled well over in a corner heading up the canyon.

The lack of suspension adjustment in the 43 mm upside-down front fork and preload only rear monoshock is telling at this price point, as the Monster’s competition all feature suspension adjustability to a greater degree. In practice, the standard suspension settings are a little harsh for lighter riders, along with a slight tendency to understeer into corners when really pushing the front.

In any case, you either ride around the problem or upgrade the suspension to suit. If you’re planning to ride the Monster around town a lot, the rear shock will feel a touch harsh, so think about backing off the preload a little as we have a feeling the settings are for a rider a little heavier than the author.

Coming to stops at traffic lights in town did raise a few concerns about heat rising from the engine. Not as bad as some previous Ducatis we’ve ridden in the last five years or so, but enough to reconsider wearing light clothing.

For braking, we had no complaints, the Brembo M4.32 Monoblocs performing as expected, if a touch softer than the units on the Panigale V2. We suspect this was done on purpose, with the Monster ostensibly being for road use and newer riders not used to the ferocity of Brembo callipers will feel a little less intimidated.

Certainly, the riding position isn’t as aggressive as we thought it would be, the wide handlebars helping to keep things under control and contributing to the lack of steering effort. We noted a little vibration coming through the footpegs but this is due to the nature of the V-twin engine more than anything and shifting the foot position a little cut the vibes down to an unobtrusive level. 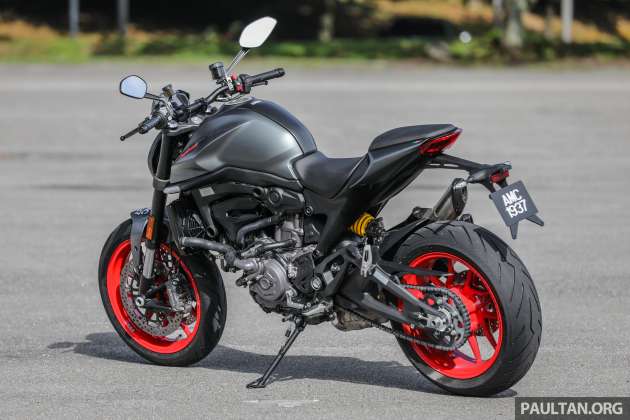 Rowing through the gears with the quickshifter showed precise shifting, the Monster pulling cleanly through the gears though low speed work in traffic betrayed a certain stiffness in the shifting. No vicious lunges forward here, the fuelling is tractable on the Monster and at no point did things ever feel out of control as they would on, say, the KTM Duke.

A TFT-LCD display, measuring 4.3-inches across, shows you everything you need and the Monster does come equipped with all the electronic riding aids that are standard equipment. Now, if you’re expecting full-blooded hooliganism with the Monster, errr… no, Ducati gives you the Streetfighter V2 for that.

The ABS is still a two-channel affair and you can’t switch it to front wheel only to allow for the rear wheel to slide. Wheelie control can be set to one of four levels or turned off entirely so you can still hoist the front wheel into the air. All good there, then. 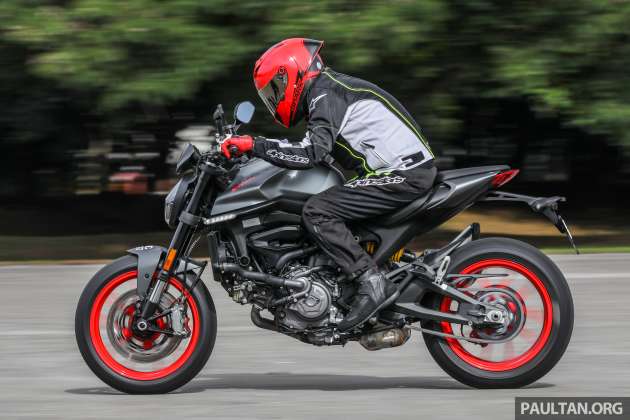 So, who needs a 2022 Ducati Monster? For the one thing, the previous Monster was a trend setter, which we somehow don’t see this iteration of the Monster doing. What it is though is a very approachable entry to the world of Ducati Performance… a gateway motorcycle, as it were.

No, this doesn’t mean it is directed at newbies. Well, it is, but it also isn’t. The Monster while having a certain reputation to live up to is meant to be for the rider aspiring to the brand, to find out what the mystique behind Ducatis is all about while also being entertaining enough for seasoned riders to add this to the stable as a V-twin runabout.