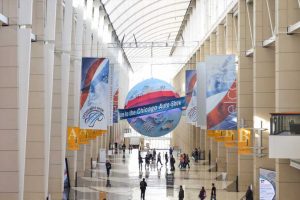 The organizers have a new date in mind but aren’t releasing it.

The 2021 Chicago Auto Show will now tentatively take place at some point in the spring, rather than the original plan to hold the event from February 13 through 21. The organizers won’t yet set official dates for the rescheduled show.

“At this point, with the recent increase in [COVID-19] cases, it doesn’t look like February is realistic,” Mark Bilek, senior director of communications and technology for the Chicago Auto Show, told Automotive News. “So we wanted to make sure that we let people know that we’re still very excited about trying to have a show in spring of 2021, at some point, be it in March, April or May.”

The organizers do have a date in mind to hold the show. They’ve submitted a proposal to officials from the health departments for Chicago and Illinois but haven’t yet received a decision. “We didn’t want to throw a date out there and then have to move it again,” Bilek told Automotive News.

Depending on the date for the Chicago Auto Show, it could be the first event of its kind in a post-Covid-19 world, based on the dates that are available right now. There’s no Geneva Motor Show in 2021, and the Los Angeles Auto Show now runs from May 21 to May 31. The New York Auto Show opens to the press on August 19. The North American International Auto Show in Detroit is from September 28 through October 9.

Unfortunately, all of those dates are still subject to change. Until a COVID-19 vaccine is widely available, don’t expect any of these shows to happen.