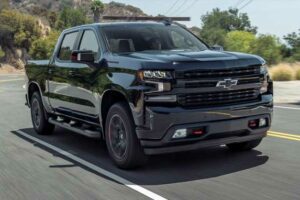 Chevrolet sold 594,094 Silverado pickup trucks in America last year. Again, that’s last year—you know, the bad one with the global pandemic. Also, General Motors will hate me for mentioning this, but since the two vehicles are virtually identical, we really ought to toss in the 253,016 Sierras GMC managed to move in 2020. Grand total: 847,110 trucks. I mention these massive sales figures because I always get a bit nervous when reviewing a product that sells in such bulk. Porsche sold 8,839 examples of the 911 last year. That’s a number I can wrap my head around, and maybe say something that will affect the numbers. One man’s opinion about the second-best-selling vehicle (Ford’s F-Series total in 2020 was 787,372 units) in the United States of America? I’m throwing a pebble into the proverbial ocean. You know what? I’m still gonna try, dammit.

This Chevy is a handsome fellow. Our test truck’s black paint with red accents (the latter being part of the $3,280 Redline Edition option package) seriously pops. Full-size trucks are massive these days, and most of the visual mass is concentrated on their grilles. The Silverado RST wears this facial weight well, managing to look aggressively thick yet sporty. The Ram 1500 looks downright dowdy by comparison, whereas the Ford F-150 is just plain. Sure, the Chevy has strange, sideways-U daytime running lights, but the rest of its front-end styling is solid, especially the black bowtie badge smartly framed in chrome trim. There’s little to note on the rest of the Silverado’s exterior except for the crucial fact that the steps cut into the rear bumper are still the smartest, best way to access the bed of these hulking half-ton trucks. Yes, even better than Chevy’s overly complex transforming tailgate.

Inside the Silverado, everything comes crashing to a halt. Look, the competition sells trucks with nicer interiors. That’s just the way it is. What angers and upsets me about that fact is that it’s no secret! Ford and Ram combined deliver more than one million pickup trucks a year with better interiors. Everyone knows this to be the case, and yet GM does little about it. Being even more frank, I’m a perennial MotorTrend Truck of the Year judge. I can attest to the fact that the Chevy Silverado’s substandard interior has knocked it out of contention for the golden calipers. Twice.

The problem is twofold: design and materials. From a design point of view, the Chevy appears to be two generations behind the more upscale innards found in the competition. The screen is nice, and it’s similar to what you’d find in a Corvette, but there’s creativity or visual interest in the cabin. And then there are the materials; nearly everything in the interior looks and feels chintzy. Bits of plasti-chrome brightwork has been applied to some of the buttons, but it’s maquillage on swine chops, if you know what I’m saying. I sat in the passenger seat for a few minutes and examined the plastics used for the dual glove boxes and the surrounding structure, and my kid pulls nicer-looking and -feeling stuff out of his Happy Meals. Moving on.

What’s Under the Hood?

The mechanicals are better, and the Silverado sure has a great engine. We all know EVs are the future of not just General Motors, but pickup trucks, too. But, man, this V-8 is a honey. It’s big, at 6.2 liters of displacement, and delivers 420 eager horsepower and 460 lb-ft of torque. Cylinder deactivation means that the pushrod small-block can run around as a 3.1-liter four-banger part of the time, as well, in a nod toward efficiency. I’ve probably used the following quote from Bob Lutz more than any other in my career but, “Americans buy horsepower but drive torque.” Chevy has done such a masterful job coupling this mighty V-8 to the jointly developed Ford/GM 10-speed automatic transmission. There are certain cars where it just feels good when you push down on the go pedal. This truck, with this powertrain, is one such vehicle.

Interestingly, the 3.5-liter twin-turbo V-6 in the Ford F-150 makes 500 lb-ft of torque (and 400 hp), but because of both a touch of turbo lag and the fact that Chevy is better at programming the 10-speed, the Blue Oval truck doesn’t feel as quick nor as powerful. Also, the big 6.2-liter beats up on the numbers put out by Ram’s 5.7-liter Hemi V-8, which pips out “just” 395 horsepower and 410 lb-ft of torque. Even though the American wing of Stellantis has shoved its 6.4-liter V-8 into everything from the Dodge Chargers to Keurig coffee pod machines, it’s not available on a 1500 pickup. (That said, there is an eTorque version of the Hemi that adds a supplemental 130 lb-ft of electric torque.) One more thing about GM’s 6.2-liter: It sounds phenomenal.

Looking at the test numbers, the 5,420-pound Chevy is pretty quick. It pulls from 0 to 60 mph in 5.5 seconds and covers the quarter mile in 14 seconds flat at 99.5 mph. I used to own a Subaru WRX that was slower than that. If you’re a pickup-truck-drag-racing kind of person, know that the lighter, 5,340-pound Ford is a touch quicker, hitting 60 mph in 5.3 seconds and dusting off the quarter in 13.9 seconds at 99.8 mph. Not much, but quicker is quicker. The big-boned Ram (5,960 pounds) truly lags, needing 6.6 seconds to hit 60 mph and a full 15 seconds to do the quarter mile, travelling at 93.4 mph. The Silverado definitively loses the braking contest, requiring a longish 133 feet to come to a stop from 60 mph. The Ford uses 123 feet, whereas the Ram needs just 121. I’m not sure what we gain from putting full-size pickup trucks around our figure eight handling course (they all do poorly while killing their front tires), but the Chevy was the fleetest at 27.5 seconds, beating the F-150 by 0.1 second. The Ram was a distant third, requiring 28.8 seconds.

Subjectively, I liked how the Silverado drove when tackling twisty canyon roads. Dare I call it sporty? I dare. Would I—could I—use the word sporty to describe either the Ford or the Ram? No. However, that’s not the common use case for a pickup, and the Chevy’s ride quality trailed that of the excellently tuned Ram. When unloaded, you were fully aware there was nothing in the bed. The same is true of a Ford F-150, and both the Ford and the Chevy use leaf springs to suspend the live rear axle, whereas the superior-riding Ram has coil springs. Of the two with the old-school tech, the Chevy’s ride is a bit more pleasant than the Ford’s.

One of the reasons given for sticking with seemingly ancient suspension technology is that leaf springs are better for towing. Fair play, if you’re actually purchasing the truck to do some work—or at least tow your party boat—as you want as much capability as possible. The Chevy can tow quite a bit, 9,300 pounds, which is more than the similarly equipped competitors. On paper, at least. With a 7,600-pound loaded horse trailer hanging off the hitch (that’s 82 percent of the RST’s capacity), the reality was quite different.

The big V-8 and its hill of lag-free torque had no problem moving the horse-laden trailer. However, as experienced horse hauler and senior editor Aaron Gold explained, “Unfortunately, the Chevy isn’t as stable as other trucks I’ve towed with. I could feel the horses moving and the trailer trying to shove the truck around on steep downgrades, and the brakes felt severely taxed. The Chevrolet is a reminder there’s more to towing ability than power. “

Where does this leave us? The 2021 Chevy Silverado 1500 RST is a good-looking full-size pickup truck with a great engine and some decent performance chops. Towing horses isn’t the truck’s forte, but despite what decades of marketing has told us, plenty of people buy trucks simply because they like driving trucks. If you’re one of those people, I’d almost recommend you buy yourself a Chevy truck similar to this one. Why almost? That interior is just a drag, especially if you’re not explicitly buying the Silverado as a work truck. Chevy comes close to delivering a satisfying pickup with this RST, but that’s the same story it’s been for far too long.