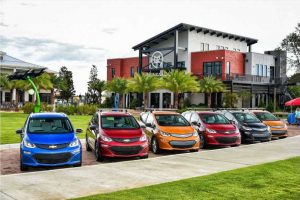 Chevrolet has been offering incredible deals on the Bolt EV, and they’ve just become even better.

General Motors just revealed its redesigned 2022 Chevrolet Bolt EV and all-new Bolt EUV. Both vehicles carry starting prices that are cheaper than the outgoing 2021 Bolt EV, which has started at around $37,000 since launch.

Chevrolet has been offering solid deals on the Bolt EV for some time. If you follow the segment, you know that the Bolt EV rarely (if ever) sells at MSRP. In order to sell or lease the car, GM has to offer very appealing deals. This is likely part of the reason the redesigned 2022 Bolt EV and the new Bolt EUV are priced more competitively.

In the meantime, Chevy has upped the ante through at least the end of the month. Automakers publish new deals at the beginning of each month, and they’re typically good until the end of the month, if not longer. However, GM changed the rules just a bit by updating its current Bolt EV deals early in the month, just before it unveiled the upcoming 2022 Bolt models.

According to CarsDirect, based on a Chevy dealer bulletin sent to dealers on February 9:

Moreover, the current Bolt EV is available with GM Employee Pricing, which was already the case for the 2020 model, but not the 2021. CarsDirect points out that that’s $11,000 off MSRP for the 2021 Bolt Premier.