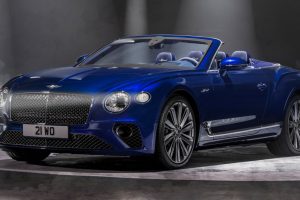 Say hello to the new 2021 Bentley Continental GT Speed Convertible. It shares the same 6.0 litre W12 TSI engine as its coupe counterpart that was unveiled less than a month ago, offering identical outputs of 659 PS and 900 Nm of torque.

It’s currently the most powerful and driver-focused version of the Continental GT Convertible. Equipped with an eight-speed dual-clutch transmission, the topless grand tourer will do the century dash in 3.7 seconds (0.1 seconds slower than the coupe) before maxing out at 335 km/h. Bentley also said the DCT shifts twice as fast in Sport mode compared to the vanilla W12 model.

Additional hardware such as rear-wheel steering and electronic limited-slip rear differential are equipped, both of which imbue the car with more dynamism. The automaker said these give the GT more grip and rearward bias (in Sport mode), as well as improved lateral grip, straight-line stability and throttle adjustability. Being a Speed model, it sits on 22-inch Speed alloys, with carbon ceramic brakes with massive 10-piston front and four-piston rear callipers being optional. Other unique design cues include the Dark Tint treatment on the radiator grille and lower bumper grille, plus Speed badging on the front fender.

No changes have been made to the Z-fold convertible roof system. It takes 19 seconds to deploy or stow (at speeds of up to 50 km/h), and customers can choose from seven roof colours, among which are black, blue, claret and grey. The underside of the roof liner can be had in eight different colours, ranging from New Red to Magnolia.

Inside, it gets an Alcantara-wrapped steering wheel, Speed insignia on the passenger dash, diamond-in-diamond quilting for the seats, Speed embroidery in the head restraints, Piano Black veneer, Speed treadplate plaques and sports pedal. The rest is standard Bentley stuff, really, so customers can personalise the GT to their individual liking.